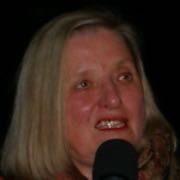 Born Helma Sanders on 20 November 1940, Sanders-Brahms studied acting in Hannover from 1960–62, and German, English, and pedagogy in Cologne from 1962-65. Her early career involved work as a television announcer and model. During a trip to Italy in 1967, she interned with film directors Pier Paolo Pasolini and Sergio Corbucci, a decisive experience in her choice to pursue film-making. Beginning in 1969, she made her own films, writing her own screenplays and producing many of her films herself. Her film-making comprised both fiction and documentary films, and many of her films contain a strong autobiographical component.

Her early films engage critically with the themes of labour, migration, and the situation of women in West Germany. Under the Pavement Lies the Strand was a central film for the German women's movement and for the student movement, as well as for the director's own emergence as an explicitly feminist film-maker. The controversial made-for-television movie Shirin’s Wedding depicted the tragic death of a Turkish migrant to Germany, addressing the subject of forced marriage. From her reading of classic German literature, she developed a special sympathy for the work of Heinrich Von Kleist. At least three of her films are either based on, or explicitly refer to, that author.

Sanders-Brahms gained international recognition with Germany, Pale Mother, which addresses German women's experiences during and after the Nazi period. As a director of the New German Cinema movement, her scripts focus on the concerns of the political left. Her final theatrical film Geliebte Clara ("Beloved Clara") concerned the love triangle between Robert Schumann, Clara Schumann, and Johannes Brahms. Her films have been awarded many prizes at festivals worldwide. In 1982, she was a member of the jury at the 32nd Berlin International Film Festival.

She was made an Officier of the French Ordre des Arts et des Lettres and a member of the Academy of Arts, Berlin.

Abroad, Sanders-Brahms was highly received by film critics from countries such as the United States, France, Japan, and the United Kingdom. In her home country of Germany however, her work was not as well regarded. German critics found her films "heavyhanded" and "navel-gazing." Shortly before her death, she was quoted saying: "Before I die, I’d just like to make one last attempt to rescue my films from oblivion in my country and say: at least have a look at them".

The contents of this page are sourced from Wikipedia article on 08 Mar 2020. The contents are available under the CC BY-SA 4.0 license.
View Helma Sanders-Brahms 's image gallery
Image Gallery