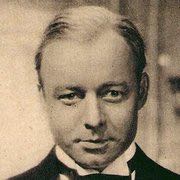 Heinrich Wilhelm "Heinz" Rühmann (7 March 1902 – 3 October 1994) was a German film actor who appeared in over 100 films between 1926 and 1993. He is one of the most famous and popular German actors of the 20th century, and is considered a German film legend. Rühmann is best known for playing the part of a comic ordinary citizen in film comedies such as Three from the Filling Station and The Punch Bowl. During his later years, he was also a respected character actor in films such as The Captain from Köpenick and It Happened in Broad Daylight. His only English-speaking movie was Ship of Fools in 1964.

Rühmann was born in Essen as the son of a restaurateur. He started his acting career during the early 1920s and appeared in numerous theatres in Germany during the following years. His role in the 1930 movie Die Drei von der Tankstelle (The Three from the Filling Station) led him to film stardom. He remained highly popular as a comedic actor (and sometime singer) throughout the 1930s and early 1940s. He remained in Germany and continued to work during the Nazi period, as did his friend and colleague, Hans Albers.

Career during the Third Reich

During the Nazi era, he acted in 37 films and directed four. After the Nazis seized power in 1933, Rühmann did not speak openly about German politics, but instead kept himself as neutral as possible. He never stated a word against or towards the Nazis in the press, although he had been a supporter of democracy. In 1938, he divorced his Jewish wife Maria Bernheim, who married a Swedish actor, and before World War II broke out, travelled to Stockholm. The divorce caused Rühmann to be accused of wanting to secure his career; however, the marriage had probably already fallen apart, and some sources say that he wanted to protect his wife with the divorce. After 1945, Bernheim defended her ex-husband against accusations of opportunism. His second wife, Hertha Feiler, whom he married shortly after, had a Jewish grandfather, a fact that caused Rühmann problems with the Nazi cultural authorities. Rühmann retained his reputation as an apolitical star during the entire Nazi era.

During the war years, Rühmann increasingly let himself be co-opted by the Third Reich. His role as lead actor in the comedy Quax the Crash Pilot was supposed to distract the populace from the war. In 1941, under the direction of Reichsfilmkammer president Carl Froelich, Rühmann played the title role in Der Gasmann, about a gas-meter reader who is suspected of foreign espionage. In 1944, the premiere of Die Feuerzangenbowle was forbidden by the Nazi film censor for "disrespect for authority". Through his good relationships with the regime, however, Rühmann was able to screen the film in public. He brought the film to the Führerhauptquartier Wolfsschanze for a private screening for Hermann Göring and others. Afterward, Göring was able to get the ban on the film lifted by Adolf Hitler. A nostalgic comedy of mistaken identities, the film was probably the most popular film of his career and later became a cult hit among college students. As a "state actor", the highest title for an actor during the Nazi era, Rühmann was not drafted into the Wehrmacht. He did have to take the basic training to become a military pilot, but for the Third Reich, Rühmann was more valuable as an actor and he was spared having to take part in the war effort. In August 1944, Joseph Goebbels put Rühmann on the Gottbegnadeten list of indispensable actors.

Rühmann was a favorite actor of Holocaust diarist Anne Frank, who pasted his picture on the wall of her room in her family's hiding place during the war, where it can still be seen today. The enormous range of Rühmann's popularity during the Nazi era is illustrated by the fact that he was also a favorite actor of Adolf Hitler and his propaganda minister Joseph Goebbels.

Rühmann had a difficult time resuming his career after the war, but by the mid-1950s, the former comedian had established himself again as a star, only this time as Germany's leading character actor. In 1956, Rühmann starred in the title role of the internationally acclaimed picture Der Hauptmann von Köpenick (The Captain of Köpenick), the true story of a Prussian cobbler, Wilhelm Voigt, who dressed up as an army officer and took over the town hall in Köpenick. In the days of the German Empire, the army had an exalted status and Voigt embarrassed the army officers and civil servants who obeyed him without question. Rühmann was also the leading man in the 1960 film version of The Adventures of the Good Soldier Schweik, after the novel by Czech author Jaroslav Hašek. He also played the role of Father Brown in three German films during the 1960s. In 1965, Rühmann was brought to Hollywood by producer Stanley Kramer for a supporting role as a German Jew in his all-star movie Ship of Fools.

His wife Hertha Feiler died in 1970 and Rühmann married his third wife Hertha Droemer in 1974. In his later years, he also worked as a recitator for German television. His last film was Faraway, So Close! (1993) by Wim Wenders, in which he played an old fatherly chauffeur named Konrad. Rühmann died in October 1994, aged 92 years. He was buried in Berg-Aufkirchen, Bavaria. His popularity with German audiences continues: In 1995, he was posthumously awarded the Goldene Kamera as the "Greatest German Actor of the Century"; in 2006, a poll voted him number one in the ZDF TV-show Unsere Besten - Favorite German Actors.