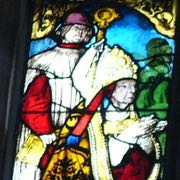 The date of Heinrich Groß von Trockau's birth is unknown, but he was already a prebendary of Augsburg Cathedral in 1451. On 14 March 1452 he became a canon of Bamberg Cathedral. He graduated from Heidelberg University in 1452. He was made a deacon on 20 April 1454.

On 1 February 1487 the cathedral chapter of Bamberg Cathedral elected Groß von Trockau to be Prince-Bishop of Bamberg and Pope Innocent VIII confirmed his appointment on 28 March 1487. He was consecrated as a bishop by Friedrich von Hohenzollern, Prince-Bishop of Augsburg, in Nuremberg on 15 July 1487.

The contents of this page are sourced from Wikipedia article on 11 Mar 2020. The contents are available under the CC BY-SA 4.0 license.
comments so far.
Comments
Reference sources
References
http://www.catholic-hierarchy.org/bishop/bgvt.html
https://d-nb.info/gnd/129023205
https://viaf.org/viaf/47829805
https://www.worldcat.org/identities/viaf-47829805
Trending today in