Since 1926, he studied in the studio at the theater Volksbühne under the direction of Erwin Piscator.

In 1933 he joined the Communist Party of Germany. After the Nazis rise to power led to party and trade union work being made illegal he published a theater magazine Rampa. Soon, he emigrated to Switzerland.

In 1934–1935 the theater played in Zurich, then to Moscow, where he worked until 1945 as chief editor of the German edition of Radio Moscow and acted in films.

In 1945 he returned to Germany. Played in Deutsches Theater, and also worked in the administration of culture in Dresden.

He died 16 July 1946 in Berlin during a hernia operation at the clinic Charité. The operation was carried out personally by the head of surgical department of 71-year-old Ferdinand Sauerbruch. By this time Sauerbruch already showed symptoms of cerebral sclerosis, mistakes were made during the routine operation that caused the death of the actor.

In 1951 the German Democratic Republic was approved Heinrich Greif Prize for outstanding achievements in the field of cinema.

The contents of this page are sourced from Wikipedia article on 11 Mar 2020. The contents are available under the CC BY-SA 4.0 license.
View Heinrich Greif 's image gallery
Image Gallery 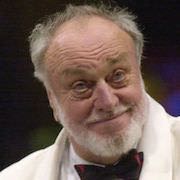