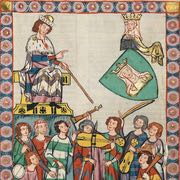 Heinrich Frauenlob (between 1250 and 1260 – 29 November 1318), sometimes known as Henry of Meissen (Heinrich von Meißen), was a Middle High German poet, a representative of both the Sangspruchdichtung and Minnesang genres. He was one of the most celebrated poets of the late medieval period, venerated and imitated well into the 15th century.

Frauenlob was born in Meissen. He had great musical talents, and held court positions in Prague. After several years wandering as a minstrel, he established the first school of the meistersingers at Mainz.

The nickname Frauenlob (Middle High German Vrowenlop), meaning "woman's praise", is said to have been given to him as the result of a poetic contest with Barthel Regenbogen, in which he maintained the term frau "lady, high-born woman" was superior to the term weib "woman, adult female", but it has been shown that he already had the surname when quite young, before the contest could have taken place.

The women of Mainz are said to have carried his bier to the cathedral in appreciation of his lifelong, chivalrous devotion to their sex. His tomb was restored in 1783 by women during the "Werther" period of German literature, and the women of Mainz erected a monument to his memory near his tomb in 1842. In 1892 German composer Reinhold Becker (1842–1924) wrote an opera about an episode in the poet's life.

Frauenlob was one of the most influential German poets of the 14th century, his contemporary reception being equalled only by Walther von der Vogelweide. His works are extant in numerous manuscripts, and his style was widely imitated still in the 15th century, so that it is in many cases impossible to decide on the authenticity of a given work. His minnelied Alle Freude verlässt mich was adapted in Czech by Záviš von Zap in c. 1400.

Counted among his works are thirteen minnelieder, the so-called Frauenleich (also known as the Marienleich, Minneleich or Kreuzleich), a poem about the Celestial Woman of the Apocalypse, Mary, and the beloved woman of the Song of Songs, a dispute between Minne and the World, and a large number of Sangsprüche (estimates ranging at around 300 poems in 15 known melodies). Frauenlob and his contemporary Regenbogen are counted as the last major representatives of late medieval Spruchdichtung. Tervooren (2001) sees the very popularity of Frauenlob as the culmination and end-point of the genre, after which it ceased to innovate, easing into imitation and written tradition. An edition of his poems was published by Ettmüller in 1843.

The text of Frauenleich was performed by the musical ensemble Sequentia in 1990. An English translation by Barbara Newman was published in 2006.