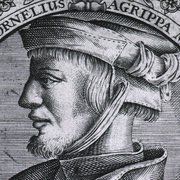 Agrippa was born in Nettesheim, near Cologne on 14 September 1486 to a family of middle nobility. Many members of his family had been in the service of the House of Habsburg. Agrippa studied at the University of Cologne from 1499 to 1502, (age 13-16) when he received the degree of magister artium. The University of Cologne was one of the centers of Thomism, and the faculty of arts was split between the dominant Thomists and the Albertists. It is likely that Agrippa's interest in the occult came from this Albertist influence. Agrippa himself named Albert’s Speculum as one of his first occult study texts. He later studied in Paris, where he apparently took part in a secret society involved in the occult.

In 1508 Agrippa traveled to Spain to work as a mercenary. He continued his travels by way of Valencia, the Baleares, Sardinia, Naples, Avignon, and Lyon. He served as a captain in the army of Maximilian I, Holy Roman Emperor, who awarded him the title of Ritter or knight.

Agrippa's academic career began in 1509, receiving the patronage Margaret of Austria, governor of Franche-Comté, and Antoine de Vergy, archbishop of Besançon and chancellor of the University of Dole. He was given the opportunity to lecture a course at the University on Hebrew scholar Johann Reuchlin's De verbo mirifico. At Dôle, Agrippa wrote De nobilitate et praecellentia foeminae sexus (On the Nobility and Excellence of the Feminine Sex), a work that tried to prove the superiority of women using cabalistic ideas. The book was probably intended to impress Margaret. Agrippa’s lectures received attention, and he was given a doctorate in theology because of them. He was, however, denounced by the Franciscan prior Jean Catilinet as a "Judaizing heretic", and was forced to leave Dôle in 1510.

In the winter of 1509-1510 Agrippa returned to Germany and studied with Humanist Johannes Trithemius at Würzburg. On 8 April 1510 he dedicated the then unpublished first draft of De occulta philosophia (On the Occult Philosophy) to Trithemius, who recommended that Agrippa keep his occult studies secret. Proceeding to the Netherlands he took service again with Maximilian. In 1510 the king sent Agrippa on a diplomatic mission to England, where he was the guest of the Humanist and Platonist John Colet, dean of St Paul's Cathedral, and where he replied to the accusations brought against him by Catilinet (Expostulatio super Expositione sua in librum De verbo mirifico). In the reply he argued that his Christian faith was not incompatible with his appreciation for Jewish thought, writing "I am a Christian, but I do not dislike Jewish Rabbis". Agrippa then returned to Cologne and gave disputations at the university's faculty of theology.

Agrippa followed Maximilian to Italy in 1511, and as a theologian attended the schismatic council of Pisa (1512), which was called by some cardinals in opposition to a council called by Pope Julius II. He remained in Italy for seven years, partly in the service of William IX, Marquess of Montferrat, and partly in that of Charles III, Duke of Savoy, probably occupied in teaching theology and practicing medicine. During his time in northern Italy Agrippa came into contact with Agostino Ricci and perhaps Paolo Ricci, and studied the works of philosophers Marsilio Ficino and Giovanni Pico della Mirandola, and the kabbalah. In 1515 he lectured at the University of Pavia on the Pimander of Hermes Trismegistus, but these lectures were abruptly terminated owing to the victories of Francis I, King of France.

In 1518 the efforts of one or other of his patrons secured for Agrippa the position of town advocate and orator, or syndic, at Metz. Here, as at Dôle, his opinions soon brought him into collision with the monks, and his defense of a woman accused of witchcraft involved him in a dispute with the inquisitor, Nicholas Savin. The consequence of this was that in 1520 he resigned his office and returned to Cologne, where he stayed about two years. He then practiced for a short time as a physician at Geneva and Freiburg, but in 1524 went to Lyons on being appointed physician to Louise of Savoy, mother of Francis I. In 1528 he gave up this position, and about this time was invited to take part in the dispute over the legality of the divorce of Catherine of Aragon by Henry VIII; but he preferred an offer made by Margaret, duchess of Savoy and regent of the Netherlands, and became archivist and historiographer to the emperor Charles V.

Margaret's death in 1530 weakened his position, and the publication of some of his writings about the same time aroused anew the hatred of his enemies; but after suffering a short imprisonment for debt at Brussels he lived at Cologne and Bonn, under the protection of Hermann of Wied, archbishop of Cologne. By publishing his works he brought himself into antagonism with the Inquisition, which sought to stop the printing of De occulta philosophia. He then went to France, where he was arrested by order of Francis I for some disparaging words about the queen-mother; but he was soon released, and on 18 February 1535 died at Grenoble. He was married three times and had a large family.

During his wandering life in Germany, France, and Italy, Agrippa worked as a theologian, physician, legal expert, and soldier. Agrippa was for some time in the service of Maximilian I, probably as a soldier in Italy, but devoted his time mainly to the study of the occult sciences and to problematic theological legal questions, which exposed him to various persecutions through life, usually in the mode described above: He would be privately denounced for one sort of heresy or another. He would only reply with venom considerably later (Nauert demonstrates this pattern effectively).

No evidence exists that Agrippa was seriously accused, much less persecuted, for his interest in or practice of magical or occult arts during his lifetime, although it was known he argued against the persecution of witches. It is impossible, of course, to cite negatively, but Nauert, the best bio-bibliographical study to date, shows no indication of such persecution, and Van der Poel's careful examination of the various attacks suggest that they were founded on quite other theological grounds.

According to some scholarship: "As early as 1525 and again as late as 1533 (two years before his death) Agrippa clearly and unequivocally rejected magic in its totality, from its sources in imagined antiquity to contemporary practice." Some aspects remain unclear, but some believe this renunciation was sincere (not out of fear, as a parody, or otherwise). Recent scholarship (see Further Reading below, in Lehrich, Nauert, and Van der Poel) generally agrees that this rejection or repudiation of magic is not what it seems: Agrippa never rejected magic in its totality, but he did retract his early manuscript of the Occult Philosophy – to be replaced by the later form.

In the Third Book of Occult Philosophy, Agrippa concludes with:

But of magic I wrote whilst I was very young three large books, which I called Of Occult Philosophy, in which what was then through the curiosity of my youth erroneous, I now being more advised, am willing to have retracted, by this recantation; I formerly spent much time and costs in these vanities. At last I grew so wise as to be able to dissuade others from this destruction. For whosoever do not in the truth, nor in the power of God, but in the deceits of devils, according to the operation of wicked spirits presume to divine and prophesy, and practising through magical vanities, exorcisms, incantions and other demoniacal works and deceits of idolatry, boasting of delusions, and phantasms, presently ceasing, brag that they can do miracles, I say all these shall with Jannes, and Jambres, and Simon Magus, be destinated to the torments of eternal fire.

According to his student Johann Weyer, in the book De praestigiis daemonum, Agrippa died in Grenoble, in 1535. Augustin Calmet wrote that Agrippa had a dog that jumped into the Rhone as his master neared death causing many to believe it was a demon.

Agrippa is perhaps best known for his books. An incomplete list:

One example of the text, not especially indicative of its broader contents, is Agrippa's analysis of herbal treatments for malaria in numeric terms:

Rabanus also, a famous Doctor, composed an excellent book of the vertues of numbers: But now how great vertues numbers have in nature, is manifest in the hearb which is called Cinquefoil, i.e. five leaved Grass; for this resists poysons by vertue of the number of five; also drives away divells, conduceth to expiation; and one leafe of it taken twice in a day in wine, cures the Feaver of one day: three the tertian Feaver: foure the quartane. In like manner four grains of the seed of Turnisole being drunk, cures the quartane, but three the tertian. In like manner Vervin is said to cure Feavers, being drunk in wine, if in tertians it be cut from the third joynt, in quartans from the fourth.

The book was a major influence on such later magical thinkers as Giordano Bruno and John Dee, but was ill-understood after the decline of the Occult Renaissance concomitant with the scientific revolution. The book (whose early draft, quite different from the final form, circulated in manuscript long before it was published) is often cited in discussions of Albrecht Dürer's famous engraving Melencolia I (1514). (Note that Philosophy of Natural Magic: Complete Work on Natural Magic, White & Black Magic, 1569, ISBN 1-56459-160-3, is simply book 1 of De occulta philosophia libri tres.)

A spurious Fourth book of occult philosophy, sometimes called Of Magical Ceremonies, has also been attributed to him; this book first appeared in Marburg in 1559 and is not believed to have been written by Agrippa.

(A semi-complete collection of his writings were also printed in Lyon in 1550; arguably more complete editions followed, but none is without serious textual problems.)

In Mary Shelley's novel Frankenstein, his writings, along with those of Albertus Magnus and Paracelsus, are listed as influences on a young Victor Frankenstein.

In Christopher Marlowe's play The Tragical History of Doctor Faustus, where Faustus decides to study necromancy and proclaims he will become "as cunning as Agrippa was" (Act 1, Scene 1, Line 119).

Appears as a character in Mary Shelley's 1833 short story The Mortal Immortal.

Appears as a character in the English translation of ''Struwwelpeter'' 1847 in The Story of the Inky Boys,

Agrippa is a character in Valery Bryusov's 1908 novel The Fiery Angel and the opera by Sergei Prokofiev based on the novel.

In Zork Nemesis, a 1996 game with alchemy as its main theme, one of the primary instances is called "Temple of Agrippa".

Alongside his student Johann Weyer, Agrippa appears as a character in the 2010 video game Amnesia: The Dark Descent.

The novel Harry Potter and the Philosopher's Stone mentions a collectible card of Agrippa.

Appears as the Wizard character that mentors the protagonist Max August in Steve Englehart's "The Point Man" 1981. There's even a reference to his pet dog that dies in the Rhone River

In Alan Moore's Jerusalem, Alma Warren is preoccupied with matters of the occult. She studies Agrippa as well as other occult heavyweights. [ Book 3 Chapter 2 "A Cold and Frosty Morning"]

Heinrich Cornelius Agrippa is a character in "High School DxD", being one of the real life historical figures who were reincarnated into devils, serving the Gremory Devil Noble Family .

The contents of this page are sourced from Wikipedia article on 09 Mar 2020. The contents are available under the CC BY-SA 4.0 license.
View Heinrich Cornelius Agrippa 's image gallery
Image Gallery