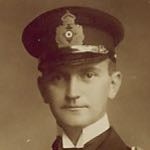 On 16 July, Heimburg sailed for the Dardanelles. This was at a time when the range of submarines was very limited, unlike today. To reach Bodrum, UB-14 had to be towed a considerable part of the distance by an Austrian destroyer. Even so, her engine broke down off Crete and her compass became defective. Despite these problems she arrived safely at Bodrum on 24 July. On arrival she recharged the batteries of the UC-14 which had arrived four days earlier with engine problems. A maintenance team then had to travel from Constantinople to carry out necessary repairs to both submarines. At the time this journey was not easy being made partly by train and partly by camel.

On 12 August, Heimburg sailed from Bodrum for the known steamer route between Alexandria and the Dardanelles. After leaving, Heimburg's first sighting was a fully lit hospital ship seen that evening which was not attacked. On 13 August he first sighted the liner Soudan in service as a hospital ship. He then sighted the RMS Royal Edward sailing unescorted for Madras. He fired one torpedo from under a mile away which hit her stern. Royal Edward sank quickly in position 36°13′N 25°51′E﻿ / ﻿36.217°N 25.850°E﻿ / 36.217; 25.850 6 miles west from Kandeliusa in the Aegean Sea. The after deck was awash in three minutes and the ship had sunk with her bows in the air in six minutes. 132 members of her crew and maybe 1000 soldiers died, while figures vary.

The survivors were picked up by Soudan, two French destroyers and some trawlers. Heimburg and UB-14 did not stay on to harass the rescue effort, but headed back to Bodrum with some technical problems where she arrived on the morning of the 15 August.

Later in August Heimburg and UB-14 sank the Australian troopship Southland bound for Gallipoli. Approximately thirty men were killed and the remaining troops and crew were rescued by nearby ships. A skeleton crew of volunteers managed to keep the ship afloat and beach it in Moudros harbour.

On 4 September, the British submarine E7 became entangled in enemy torpedo nets off Nagara Point in the Dardanelles. All attempts to free the submarine failed. However, they had caught the attention of Heimburg, currently in harbour with UB-14 which was undergoing repairs at nearby Çanakkale. He visited the spot in a small skiff, from which he lowered a small explosive charge. E7 was forced to the surface and her crew scuttled it before they were taken as prisoners of war.

While interviewing German veterans of the U-boats, American journalist Lowell Thomas was introduced to Heimburg by Lothar von Arnauld de la Perière. Heimburg's interview about his wartime service appeared in Thomas' 1928 book Raiders of the Deep.

At the beginning of World War II, Heimburg was a judge at the Reichskriegsgericht. Until 1943, when he was retired, Heimburg served in Bremen. In 1944 he was selected to sit on the People's court, a Nazi special court. Despite the fact that he was now retired, in March 1945 Heimburg was apprehended by the Soviets and died in a POW camp near Stalingrad in 1945.