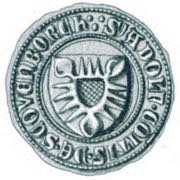 Heilwig of Lippe
The basics

She was a daughter of Lord Herman II of Lippe and his wife, Oda of Tecklenburg.

On 14 February 1246, she founded the Cistercian monastery in Herwardeshude, a village at the mouth of the Pepermölenbek, between the later St. Pauli and Altona. The monastery was confirmed by Pope Innocent IV in 1247. This monastery later founded the monasteries In Valle Virgum, also in Herwardeshude, and in 1530, after the reformation, the Monastery of St. John, which still exists as a Protestant nunnery.

In 1870, the Heilwigstraße in Hamburg-Eppendorf was named after her.

She was married to Count Adolf IV of Holstein-Kiel and Schauenburg. They had at least three children:

The contents of this page are sourced from Wikipedia article on 11 Mar 2020. The contents are available under the CC BY-SA 4.0 license.
View Heilwig of Lippe 's image gallery
Image Gallery