Hebe Maria Monteiro de Camargo Ravagnani DmSE • Dama Oficial • DmIH ([ˈɛbi mɐˈɾi.ɐ mõˈtejɾu dʒi kɐˈmaɾɡu ˌʁavɐˈɲɐ̃ni]; March 8, 1929 – September 29, 2012) was a Brazilian television host, singer and actress. She is considered the "Queen of Brazilian Television" (Portuguese: Rainha da Televisão Brasileira). She died at her home on September 29, 2012. Her net worth was over US$360 million.

Hebe Camargo was born in Taubaté, São Paulo, was the daughter of Esther Magalhães Camargo and Sigesfredo Monteiro Camargo, both of Portuguese origin, She began her career as a singer in the 1940s with her sister Estela, as Rosalinda e Florisbela. During her singing career, Camargo performed sambas and boleros in nightclubs. She left her musical career to devote more time to radio and television. She was invited by Assis Chateaubriand to attend the first live broadcast of Brazilian television, in the neighborhood of Sumaré, São Paulo, Brazil.

As a singer, Camargo appeared in comedy films by Mazzaropi and starred with Agnaldo Rayol in one of them. In the 1950s, she entered television and worked as a presenter in a series on TV Paulista. In 1955, Camargo appeared in the first program for women on Brazilian television, O Mundo é das Mulheres (The World belongs to Women), on television in Rio de Janeiro, which aired five times a week.

In the 1960s, Camargo moved to the Rede Record network, where, for many years, she maintained a top-rated program. During the Jovem Guarda era, Hebe gave way to new talent. On April 10, 1966 the network began broadcasting a Sunday program featuring Camargo as an interviewer. This show was sponsored by the Brazilian airline, Varig, with an advertising featuring Camargo.

Camargo was seen on almost every television station in Brazil, including the Rede Record and Rede Bandeirantes, in the 1970s and 1980s.

In 1980, after a long hiatus she returned to work as an interviewer. From March 1986 to December 2010, Camargo was on the SBT Network, where she presented the television program Hebe, which became one of the network's longest-running programs. The show was also broadcast on Rede Tupi and Rede Bandeirantes, and had a spin-off show Hebe por Elas (Hebe for Them) in the early 1990s. She also presented Fora do Ar, and participated in Telethon, comedy specials, and Romeu e Julieta, in which she starred with Ronald Golias and Nair Bello.

In 1995, EMI released a CD of Camargo's greatest hits. On April 22, 2006 she celebrated her thousandth program on SBT. She also has participated in social activities, such as taking part in the Cansei movement, a 2007 protest critical of the Brazilian government.

Camargo was spending New Year's Eve in Miami when she complained of severe abdominal pain. A bulletin issued by the hospital later reported that Hebe was subjected to a diagnostic laparoscopy, which found cancer. On January 8, 2010, Camargo was admitted to Albert Einstein Hospital in São Paulo for surgery to remove cancer from the peritoneum. After surgery and chemotherapy, she returned to work on March 8, 2010.

Camargo suffered from cancer since 2010. She died at dawn on September 29, 2012, having probably suffered a cardiac arrest while she was sleeping.

The contents of this page are sourced from Wikipedia article on 10 Feb 2020. The contents are available under the CC BY-SA 4.0 license.
View Hebe Camargo 's image gallery
Image Gallery 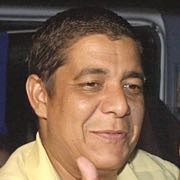