Hasan Predojević (c. 1530 – 22 June 1593), also known as Telli Hasan Pasha (Turkish: Telli Hasan Paşa), was the fifth Ottoman beylerbey (vali) of Bosnia and a notable Ottoman Bosnian military commander, who led an invasion of the Habsburg Kingdom of Croatia during the Ottoman wars in Europe.

He was born Nikola Predojević into the Serbian Predojević clan, from Eastern Herzegovina. According to Muvekkit Hadžihuseinović he was born in Lušci Palanka, in the Bosanska Krajina region, however, according to his nickname Hersekli, he was from Herzegovina. The birthplace has been given specifically as Bijela Rudina, Bileća. His family originated from Klobuk.

An Ottoman sultan wrote in a book that he had requested from a notable lord in Herzegovina, named Predojević, that 30 small Serb children (including Predojević's only son Jovan, and his nephew Nikola) to be sent to Ottoman service (see devshirme). The very young Nikola was then taken to Constantinople as acem-i oğlan (foreign child) and brought up in the Sultan's court, converting to Islam, adopting the name Hasan and advancing to the post of çakircibaşa (chief falconer and commander of falconers in the Sultan's court).

After having been appointed Beglerbeg of Bosnia, Telli Hasan Pasha had the Rmanj Monastery renewed as a seat of his brother, Serbian Orthodox monk Gavrilo Predojević. He also founded a mosque in Polje, Grabovica, in the Bileća municipality.

He was elevated and appointed Beglerbeg (Governor-General) of the Bosnia Eyalet in 1591. A bellicose and dynamic military leader, Hasan strengthened the army of the Eyalet equipping it with better horses and erecting a bridge at Gradiška with the purpose of easier maneuvering between Bosnia and Slavonia.

In August 1591, without a declaration of war, Hasan Pasha attacked Habsburg Croatia and reached Sisak, but was repelled after 4 days of fighting. Thomas Erdődy, the Ban of Croatia, launched a counterattack and seized much of the Moslavina region. The same year Hasan Pasha launched another attack, taking the town of Ripač on the Una River. These raids forced the Ban to declare a general uprising to defend the country in late January, 1592. These actions of the Ottoman regional forces under Hasan Pasha seem to have been contrary to the interest and policy of the central Ottoman administration in Constantinople, and due rather to aims of conquest and organized plundering by the war-like Bosnian sipahi, although perhaps also under the pretext of putting an end to Uskok (Balkan Habsburg-sided pirates and bandits engaged in guerrilla warfare against the Ottomans) raids into the Eyalet; since the two realms had signed a nine-year peace treaty earlier in 1590. Hasan Pasha's forces of approximately 20,000 janissaries continued to raid the region, with the goal of seizing the strategically important town of Senj and its port, and to eliminate the Uskoci as well; because of all this, the Holy Roman Emperor sent his ambassador so he would beg that Hasan Pasha be removed from his post, or otherwise an end would be put to the existing truce. The ambassador was told in reply, that it belonged to the Grand Vizier and to Derviš-paša, the Sultan's favourite, to repel their aggressions against the Ottoman Empire; that, the imperial ambassador was told, was a sufficient answer. After learning this, Hasan Pasha felt himself encouraged enough to lead his forces towards Bihać, which was conquered on June 19, 1592 after eight days of siege, along with several surrounding forts. Records show that nearly 2,000 people died in defense of the town, and an estimated 800 children were taken for Ottoman servitude (see devshirme), to be educated in Islam and become janissaries, as Hasan had been himself. After having placed a sufficient garrison in Bihać, he erected two other fortresses in its vicinity; the command of which he conferred to Rustem-beg, who was the leader of the Grand Vizier Ferhad Pasha's militia. In all, during this two-year campaign, the Ottoman Bosnian regional invading forces, led by Hasan Pasha, burned to the ground 26 cities throughout the Croatian Frontier and took some 35,000 war captives. At the same time, at Predojević's order, Orthodox Serbs were settled in the "whole region around Bihać" from 1592 to 1593, Predojevic fully relied on Vlachs using them as soldiers. According to an official report, Vlachs by Hasan's order in 1593 after the fall of Bihać, settled the areas around Brekovica, Ripač, Ostrvica, Vrla Draga up to Sokolac.( while Orthodox Vlachs from Eastern Herzegovina, and with them some Turkish and Bosnian Muslim aristocratic feudal landlords as well, were settled in the central part of the Una river region (Pounje), around Brekovica, Ripač, Ostrovica and Vrla Draga up to Sokolovac, in such numbers that they formed a significant population of this region.

At first, Telli Hasan Pasha's troops met little resistance, allowing them to capture numerous Uskoci settlements, where they enslaved or slaughtered the entire population and burned the settlements. His forces soon besieged and captured Senj and exterminated the Uskoci population. For his successes, the Pasha was awarded the title of "Vizier" by the Sultan. However, the following year, Telli Hasan Pasha decided to advance further into Croatia. His force of some twenty-thousand was soundly defeated in his third attempt to conquer Sisak, in the battle that took place near by that fortified town, in which Hasan Pasha is generally reported to have died, alongside his brother Džafer Bey (governor of the Sanjak of Pakrac-Cernica), Mehmed Pasha (the sultan's nephew and governor of the Sanjak of Herzegovina), Opardi Bey (governor of the Sanjak of Klis-Livno), and many other Turkish and Bosnian Muslim Pashas, Beys and Aghas, who accompanied the Vizier in his campaign, having been routed. According to Mustafa Naima: "The brave Hasan Pasha himself also met with his fate, having fallen into the river with one of the bridges which had been cut to prevent the pursuit of the enemy. Such was the result of this terrible day." Indeed, after he had drowned in the river, his dress was taken as a trophy to Ljubljana where it was remade into the sacerdotal coat worn by the bishop during the celebration of the Thanksgiving mass.

A monastery was built on the location of his grave, after requests of a Predojević to Sultan Murad, who also granted Kolunić and Smiljan (metochion). Safvet-beg Bašagić praises him as a meritorious general and statesman, as well as a great and fearless hero.

The contents of this page are sourced from Wikipedia article on 19 Apr 2020. The contents are available under the CC BY-SA 4.0 license.
View Hasan Predojević 's image gallery
Image Gallery 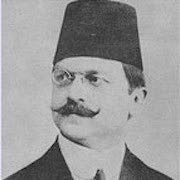