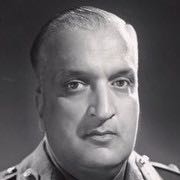 Hari Singh GCSI GCIE GCVO (23 September 1895 – 26 April 1961) was the last ruling Maharaja of the princely state of Jammu and Kashmir in India.

In 1903, Hari Singh served as a page of honour to Lord Curzon at the grand Delhi Durbar. At the age of thirteen, he was sent to Mayo College in Ajmer. A year later, in 1909, his father died, and the British took a keen interest in his education and appointed Major H. K. Brar as his guardian. After Mayo College, Hari Singh went to the British-run Imperial Cadet Corps at Dehra Dun for military training.

Maharaja Pratap Singh appointed him as the commander-in-chief of the State Forces in 1915.

The "youthful escapades" of Hari Singh included paying £300,000 for blackmail by a prostitute in Paris in 1921. That issue had resulted in a court case in London in 1924 during which the India Office tried to keep his name out of proceedings by arranging for him to be referred to as "Mr A."

Singh was known as a lavish spender of money. The funeral of his uncle and former ruler Pratap Singh is believed to have expended much gold and jewellery in the funeral pyre.

Hari Singh's married life is dark. He married four times as his first three wives failed to give birth to his heirs. Each of them died within a few years of childlessness allowing Hari Singh to immediately take a new bride. His last wife, Tara Devi Sahiba of Kangra, had a son.

Following the death of his uncle Pratap Singh in 1925, Hari Singh ascended the throne of Jammu and Kashmir. He made primary education compulsory in the state, introduced laws prohibiting child marriage, and opened places of worship to the low castes.

The Seal of Maharaja Hari Singh had a Crown at the top. A katar or ceremonial dagger sat below the crown. Two soldiers held flags. An image of the sun was between them, that symbolised his Rajput lineage from Lord Surya, the Hindu Sun God.

1931 Kashmir agitation & Kashmir Martyrs' Day. Hari Singh was believed to have been hostile towards the Indian National Congress, in part because of the close friendship between Kashmiri political activist and socialist Sheikh Abdullah and the Congress leader Jawaharlal Nehru. He also opposed the Muslim League and its members' communalist outlook, as represented by their two-nation theory.

In 1947, after India gained independence from British rule, Jammu and Kashmir could have joined India, joined Pakistan, or remained independent. Hari Singh originally manoeuvred to maintain his independence by playing off India and Pakistan. There was a widespread belief that rulers of the princely states, in deciding to accede to India or Pakistan, should respect the wishes of the population, but few rulers took any steps to consult on such decisions. Jammu and Kashmir was a Muslim majority state. Pashtun Tribesman from Pakistan then invaded Kashmir and defeated Hari Singh's forces. Hari Singh appealed to India for help. Although the Indian Prime Minister Nehru was ready to send troops, the Governor-General of India, Lord Mountbatten of Burma, advised the Maharaja to accede to India before India could send its troops. Hence, considering the emergency situation, the Maharaja signed the Instrument of Accession on 26 October 1947, joining the whole of his princely state (including Jammu, Kashmir, Northern Areas, Ladakh, Trans-Karakoram Tract and Aksai Chin) to the Dominion of India. These events triggered the first Indo-Pakistan War.

Pressure from Nehru and Sardar Patel eventually compelled Hari Singh to appoint his son and heir, Yuvraj (crown prince) Karan Singh, as Regent of Jammu and Kashmir in 1949, although he remained titular Maharaja of the state until 1952, when the monarchy was abolished. He was also forced to appoint the popular Kashmiri leader Sheikh Abdullah as the prime minister of Kashmir. He had a contentious relationship with both Nehru and Abdullah. Karan Singh was appointed 'Sadr-e-Riyasat' ('Head of State') in 1952 and Governor of the State in 1964. Abdullah would later be dismissed from his position as prime minister of Kashmir and jailed by Karan Singh.

Nehru and Abdullah conspired to banish the Maharaja from Jammu and Kashmir and forced him to live in exile in Bombay for fourteen years till his death there,Hari Singh spent his final days in Bombay. He died on 26 April 1961. As per his will, his ashes were brought to Jammu and spread all over Jammu and Kashmir and immersed in the Tawi River at Jammu.

He was married four times. With his fourth wife, Maharani Tara Devi (1910–1967), he had one son, Yuvraj (crown prince) Karan Singh.

The contents of this page are sourced from Wikipedia article on 24 Jun 2020. The contents are available under the CC BY-SA 4.0 license.
View Hari Singh 's image gallery
Image Gallery 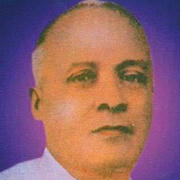