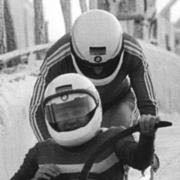 Harald Czudaj (born 14 February 1963 in Wermsdorf, Bezirk Leipzig) is an East German-German bobsledder who competed during the 1990s. Competing in three Winter Olympics, he won a gold medal in the four-man event at Lillehammer in 1994.

Czudaj also won four medals at the FIBT World Championships with two silvers (Two-man and four-man: both 1990 for East Germany) and two bronzes (Four-man: 1991, 1995, both for Germany). He also won the 1997-98 Bobsleigh World Cup championship in the four-man event.

Prior to the 1992 Winter Olympics, he came under fire for working as an informer for the Stasi, submitting at least ten reports on his teammates when he was with SV Dynamo in Altenberg, East Germany between 1988 and 1990. Czudaj was allowed to compete following investigation by German sports authorities.

At the 2006 Winter Olympics, Czudaj was a coach for the Dutch women's bobsleigh team.