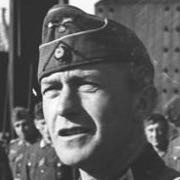 Hans von Ahlfen (20 February 1897 – 11 September 1966) was a general in the German Army in the Second World War. He was the commandant of 'Fortress Breslau' at the beginning of the siege of the city in early 1945, but was dismissed by Hitler because of strategic differences.

Ahlfen was born in Berlin and joined the army in October 1914 as an officer cadet. He served in the First World War as a lieutenant in an engineer battalion and as a commander of armoured trains. Between the wars he was retained in the Reichswehr, serving mostly with the 2nd Pioneer Battalion, before becoming an instructor at the Military Academy in August 1935. He had a military textbook entitled Service with the Pioneers published in 1937.

At the outbreak of the Second World War, Ahlfen was a lieutenant colonel in the army. He was given command of a motorised pioneer battalion, serving on the eastern front and later in Norway.

On 30 January 1945 Ahlfen was promoted to major general and appointed by Field Marshal Ferdinand Schörner as the commandant of the city of Breslau which Adolf Hitler had declared in August 1944 to be a ‘fortress’, to be defended at all costs. He was soon in conflict with the Gauleiter of the city Karl Hanke who had been declared Breslau’s “battle commander” by Hitler. Hanke advocated a breakout using parachute troops which Ahlfen did not consider realistic and he disagreed with him on several other issues, including the construction of an auxiliary airstrip that would be less vulnerable to attack. On the orders of Schörner and at the instigation of Hanke he was replaced as commandant by General of the Infantry Hermann Niehoff on 5 March 1945. Great loss of life and destruction then followed during the Siege of Breslau as Soviet forces sought to capture the city which held out for two months defended partly by elderly Volkssturm home guard and boys from the Hitler Youth, with little defence against air attacks.

Ahlfen was captured by the Western Allies on 17 April 1945 whilst serving with Army Group B as General of Pioneers and was released from captivity on 30 June 1947. He then wrote The battle of the fortress Breslau (published by Ernst Siegfried mediator, 1957). In the next few years he worked with Hermann Niehoff, his successor as the commander of Fortress Breslau on this topic. In 1959 they jointly published the book So fought Breslau (Graefe and Unzer Verlag, 1959), which was a big commercial success, and a year later, a second expanded edition followed. In Battle for Silesia (Graefe and Unzer Verlag, 1961) Ahlfen considered the wider conflict in 1945. He died in Oberndorf am Neckar aged 69 in 1966.

The contents of this page are sourced from Wikipedia article on 09 Mar 2020. The contents are available under the CC BY-SA 4.0 license.
View Hans von Ahlfen 's image gallery
Image Gallery