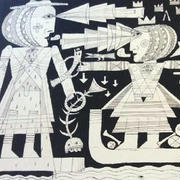 Hans Peter Kaindl is an artist born in Salzburg, Austria, and a graduate from the University of Vienna, where he was awarded a master's degree in history of art and advanced arts. After graduating in 1984, he continued his craft and in 1987 he became a specialist in art restoration.

He has had numerous exhibitions in Salzburg and Vienna; The Exhibition Postparkasse Vienna School of Fantastic Realism, First Metal Paintings influenced by Shamanic Work Exhibition in Vienna, Therapy and Shamanism workshops, A view of Transformed Realties and “Transformations” in Tullnrebach, Austria after being trained by Felicitas Goodman.

His most recent work is displayed in the Big Sur Gallery in Carmel, California. 3 most notable works are Rainbow Catcher, Parents Release their Monster and Riding the Quite Fish in the Air - all on copper foil. The copper foil is engraved using a special pen and a soft under layer where the foil is returned before a layer of tempera is laid over. With a special paper, some of the colour is moved away, to leave the piece shiny before egg tempera is put over the work.