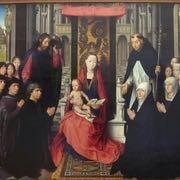 Hans Memling (also spelled Memlinc; c. 1430 – 11 August 1494) was a German painter who moved to Flanders and worked in the tradition of Early Netherlandish painting. He was born in the Middle Rhine region, and probably spent his childhood in Mainz. He had moved to the Netherlands by 1465 and spent time in the Brussels workshop of Rogier van der Weyden. He was subsequently made a citizen of Bruges, where he became one of the leading artists in which he painted religious works that often incorporated portraits of his wealthy patrons. Memling's patrons included wealthy burghers (bankers, merchants, and politicians), clergymen, and aristocrats.

Memling's portraits built upon the styles that he learned in his youth. He became very successful, and in 1480 was listed among the wealthiest citizens in a city tax list.

He married Anna de Valkenaere sometime between 1470 and 1480, and they had three children. Memling's art was rediscovered, and became very popular, in the 19th century.

Born in Seligenstadt, near Frankfurt in the Middle Main region, Memling served his apprenticeship at Mainz or Cologne, and later worked in the Low Countries under Rogier van der Weyden (c. 1455–1460) in Brussels, Duchy of Brabant. He then worked at Bruges, County of Flanders by 1465.

He may have been wounded at the Battle of Nancy (1477), sheltered and cured by the Hospitallers at Bruges and to show his gratitude he refused payment for a picture he had painted for them. Memling did paint for the Hospitallers in 1479 and 1480, and it is likely that he was known to the patrons of St John prior to the Battle of Nancy. In 1477, when he was believed dead, he was under contract to create an altarpiece for the gild-chapel of the booksellers of Bruges. This altarpiece, Scenes of the Passion of Christ, now in the Galleria Sabauda of Turin, is not inferior in any way to those of 1479 in the Hospital of St. John, which for their part are hardly less interesting as illustrative of the master's power than The Last Judgment, which since the 1470s, is in the National Museum, Gdańsk. Critical opinion has been generally unanimous in assigning this altarpiece to Memling. This is evidence that Memling was a resident of Bruges in 1473; for the Last Judgment was likely painted and sold to a merchant at Bruges, who shipped it there on board a vessel bound to the Mediterranean which was captured by Danzig privateer Paul Beneke in that very year. The purchase of his pictures by an agent of the Medici demonstrates that he had a considerable reputation.

The oldest allusions to pictures connected to Memling point to his relations with the Burgundian court, which was held in Brussels. The inventories of Margaret of Austria, drawn up in 1524, allude to a triptych of the God of Pity by Rogier van der Weyden, of which the wings containing angels were painted by "Master Hans". He may have been apprenticed to van der Weyden in Bruges, where he afterwards dwelt.

The clearest evidence of the connection of the two masters is that afforded by pictures, particularly an altarpiece, which has alternately been assigned to each of them, and which may be due to their joint labours. In this altarpiece, which is a triptych ordered for a patron of the house of Sforza, we find the style of van der Weyden in the central panel of the Crucifixion, and that of Memling in the episodes on the wings. Yet the whole piece was assigned to the former in the Zambeccari collection at Bologna, whilst it was attributed to the latter at the Middleton sale in London in 1872.

Memling's painting of the Baptist in the gallery of Munich (c. 1470) is the oldest form in which Memling's style is displayed. The subsequent Last Judgment in Gdańsk shows that Memling preserved the tradition of sacred art used earlier by Rogier van der Weyden in the Beaune Altarpiece.

Memling's portraits, in particular, were popular in Italy. According to Paula Nuttall, Memling's distinctive contribution to portraiture was his use of landscape backgrounds, characterized by "a balanced counterpoint between top and bottom, foreground and background: the head offset by the neutral expanse of sky, and the neutral area of the shoulders enlivened by the landscape detail beyond". Memling's portrait style influenced the work of numerous late-15th-century Italian painters, and is evident in works such as Raphael's Portraits of Agnolo and Maddalena Doni. He was popular with Italian customers as shown in the preference given to them by such purchasers as Cardinal Grimani and Cardinal Bembo at Venice, and the heads of the house of Medici at Florence.

Memling's reputation was not confined to Italy or Flanders. The Madonna and Saints (which passed from the Duchatel collection to the Louvre), the Virgin and Child (painted for Sir John Donne and now at the National Gallery, London), and the four attributed portraits in the Uffizi Gallery of Florence (including the Portrait of Folco Portinari), show that his work was widely appreciated in the 16th century.

The Scenes from the Passion of Christ in the Galleria Sabauda of Turin and the Advent and Triumph of Christ in the Pinakothek of Munich are illustrations of the habit in Flanders art of representing a cycle of subjects on the different planes of a single picture, where a wide expanse of ground is covered with incidents from the Passion in the form common to the action of sacred plays.

Around 1492, Memling was commissioned to paint the Najera Altarpiece for the Benedictine Monastery of Santa Maria la Real in Najera, Riojia, Spain. The altarpiece, which was completed in Flanders, consisted of an image of God surrounded by angels playing a variety of musical instruments while atop a row of clouds before a golden background. Recent scholarship by Bart Fransen has determined that Gonzalo de Cabredo and Abbot Pablo Martinez commissioned the creation of this artwork.

Memling became sufficiently prosperous that his name appears on a list of the 875 richest citizens of Bruges who were obligatory subscribers to the loan raised by Maximilian I of Austria, to finance hostilities towards France in 1480. Memling's name does not appear on subsequent subscription lists of this type, suggesting that his financial circumstances declined somewhat as a result of the economic crisis in Bruges during the 1480s.

The masterpiece of Memling's later years, the Shrine of St Ursula in the museum of the hospital of Bruges, is fairly supposed to have been ordered and finished in 1480. The delicacy of finish in its miniature figures, the variety of its landscapes and costume, the marvellous patience with which its details are given, are all matters of enjoyment to the spectator. There is later work of the master in the St Christopher and Saints of 1484 in the academy, or the Diptych of Maarten van Nieuwenhove in the hospital of Bruges, or a large Crucifixion, with scenes from the Passion, of 1491 from the Lübeck Cathedral (Dom) of Lübeck, now in Lübeck's St. Annen Museum. Near the close of Memling's career he was increasingly supported by his workshop. The registers of the painters' guild at Bruges give the names of two apprentices who served their time with Memling and paid dues on admission to the guild in 1480 and 1486. These subordinates remained obscure.

He died in Bruges. The trustees of his will appeared before the court of wards at Bruges on 10 December 1495, and we gather from records of that date and place that Memling left behind several children and considerable property.

Memling carpets are a type of early Oriental carpet painted in several Memlings, and named after him. They are characterized by guls with "hooked" lines radiating from a central body, and probably came from Anatolia or Armenia.

The contents of this page are sourced from Wikipedia article on 11 Mar 2020. The contents are available under the CC BY-SA 4.0 license.
View Hans Memling 's image gallery
Image Gallery 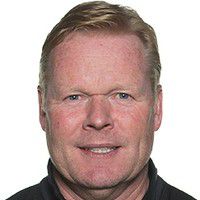