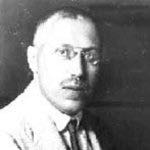 Born in Vienna as the son of a higher government official of the k.k. Telegraphen-Korrespondenz-Bureau (since 1946 named "Austria Presse Agentur"), in 1898 Hahn became a student at the Universität Wien starting with a study of law. In 1899 he switched over to mathematics and spent some time at the universities of Strasbourg, Munich and Göttingen. In 1902 he took his Ph.D. in Vienna, on the subject "Zur Theorie der zweiten Variation einfacher Integrale". He was a student of Gustav von Escherich.

He was appointed to the teaching staff (Habilitation) in Vienna in 1905. After 1905/1906 as a stand-in for Otto Stolz at Innsbruck and some further years as a Privatdozent in Vienna, he was nominated in 1909 Professor extraordinarius in Czernowitz, at that time a town within the empire of Austria. After joining the Austrian army in 1915, he was badly wounded in 1916 and became again Professor extraordinarius, now in Bonn. In 1917 he was nominated a regular Professor there and in 1921 he returned to Vienna with this title, where he stayed until his rather early death in 1934 at the age of 54, following cancer surgery. He had married Eleonore ("Lilly") Minor in 1909 and they had a daughter, Nora (born 1910).

He was also interested in philosophy, and was part of a discussion group concerning Mach's positivism with Otto Neurath and Phillip Frank prior to the First World War. In 1922, he helped arrange Moritz Schlick's entry into the group, which led to the founding of the Vienna Circle, the group that was at the center of logical positivist thought in the 1920s. His most famous student was Kurt Gödel, whose Ph.D. thesis was completed in 1929. Within the Vienna Circle, Hahn was also known (and controversial) for using his mathematical and philosophical work to study psychic phenomena; according to Karl Menger he sometimes openly advocated further research into extrasensory perception while lecturing.

Hahn's contributions to mathematics include the Hahn–Banach theorem and (independently of Banach and Steinhaus) the uniform boundedness principle. Other theorems include:

Hahn authored the book (Hahn 1921): according to Arthur Rosenthal, "... (it) formed a great advance in the Theory of Real functions and had a great influence on the further development of this theory". He was also a co-author of the book Set Functions, published in 1948 by Arthur Rosenthal, fourteen years after his death in Vienna in 1934.

In 1921 he received the Richard Lieben Prize. In 1926 he was the president of the German Mathematical Society. In 1928 he was an Invited Speaker at the International Congress of Mathematicians in Bologna.

All his mathematical and philosophical works, except all books and all but one of his book reviews, are published in the three volumes (Hahn 1995), (Hahn 1996) and (Hahn 1997) of his "Collected papers".

The contents of this page are sourced from Wikipedia article on 09 Mar 2020. The contents are available under the CC BY-SA 4.0 license.
View Hans Hahn 's image gallery
Image Gallery