Hans Goldmann (20 November 1899 in Komotau, Kingdom of Bohemia, Austro-Hungarian Empire – 19 November 1991 in Bern) was an Austrian-Swiss ophthalmologist and inventor.

In 1924 Goldmann went to Bern as assistant to August Siegrist at the eye clinic of the University of Bern. In 1927 he became there a senior physician (Oberarzt). In 1930 he received his ophthalmic Habilitation and became a Privatdozent. In 1935 he married Erna Renfer. In 1935 he also succeeded Siegrist as the clinic's director and professor of ophthalmology. From 1945 to 1947 Goldmann was the dean of the medical faculty. In 1964/1965 he was the rector of the University of Bern. In 1968 he retired as professor emeritus. He was the eye clinic's director continuously from 1935 to 1968. He was the author or co-author of more than 200 articles in peer-reviewed journals.

He was the author of more than 200 articles in peer-reviewed journals. At the eye clinic of the University of Bern there is a Hans-Goldmann-Stiftung (Foundation) for orthoptics. His name is attached to Goldmann-Favre syndrome. 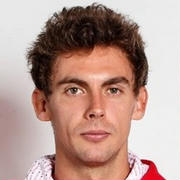