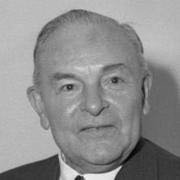 Hans Ehard was born in Bamberg in 1887, the son of a local official, August Ehard. He was married in 1916 to Annelore Maex. After his wife died in 1957, he married Sieglinde Odörfer in 1960.

After studying jurisprudence in Munich and Würzburg Ehard became public prosecutor in the Bavarian Ministry of Justice in 1919. In this office, he was the main prosecutor of Hitler and Ludendorff in 1924, after their failed attempt to overthrow the Bavarian government in 1923. In 1933 he became President of the high court in Munich, a position he held until the end of the war. He sympathised with the Bavarian People's Party but was not politically active in those years.

After the war, in 1945, he briefly served under Schäffer as Minister of Justice, later serving in Hoegner's first cabinet as undersecretary of state in the Ministry of Justice. He was a member of the constituent assembly, and was elected Minister President on 21 December 1946 with a coalition of CSU, SPD and the Economic Structure Combination (Wirtschaftliche Aufbau-Vereinigung). He became the first freely elected Bavarian prime minister since 1933. He was a member of the Bavarian Landtag from 1946 to 1966.

When the SPD withdrew its Ministers from the coalition he was able to form a CSU-only government on 21 September 1947. During the formation years of the Federal Republic of Germany, he advocated a strongly federalist concept for the new country, in opposition to most of the SPD-ruled states, who wanted a strong central government. He also argued for a form of European federation. From 1949 to 1955 he was also chairman of the CSU. From 1954 to 1957, his party was in opposition to the SPD-lead coalition government. As of 2008, this three years were the CSU's only period outside of government. Ehard held in those years the position of President of the Landtag, from 1954 to 1960.

Between 26 January 1960 to 11 December 1962 he again served as Minister President, stepping down to become Justice Minister, in which capacity he served until 5 December 1966

Ehard had been President of the Schutzgemeinschaft Deutscher Wald (SDW), an environmental charity, as well as of the Bavarian Red Cross. In 1957 he was made an honorary citizen of city of Munich, the British equivalent being Freedom of the City.

Hans Ehard was the oldest former Minister-President of Germany from 9 June 1980 to November 1985, preceded by Wilhelm Kaisen and succeeded by Max Seydewitz. Counting only the Ministers-President of the FRG he was succeeded by Bruno Diekmann on 27 March 1990. He died in Munich.

The contents of this page are sourced from Wikipedia article on 08 Mar 2020. The contents are available under the CC BY-SA 4.0 license.
View Hans Ehard 's image gallery
Image Gallery