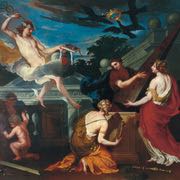 Weissenkircher was born in Laufen an der Salzach, which today lies on the Bavarian side of the Austrian - German border, into the family of a Salzburg artist. Like his fellow Laufen born contemporary, Johann Michael Rottmayr, he trained under the painter Johann Carl Loth who was born in Munich and ran an academy for German-speaking painters in Venice. Weissenkircher adopted much from Michelangelo Caravaggio's painting style. He traveled extensively during his studies, including to the important art and cultural centers of Rome, Florence and Bologna. He finally settled in Styria where he brought the style of the Italian Renaissance north to the court of the Princes of Eggenberg as court painter. He is responsible for numerous, well known works, most importantly the ceiling and wall paintings of the Planetary Room in Schloss Eggenberg which took 8 years from 1678 to 1685 to complete. Additionally, he was responsible for numerous paintings, altar paintings and high altars throughout Styria. He died in Graz, Styria, Austria.

The contents of this page are sourced from Wikipedia article on 10 Mar 2020. The contents are available under the CC BY-SA 4.0 license.
View Hans Adam Weissenkircher 's image gallery
Image Gallery