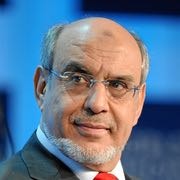 Hamadi Jebali (Arabic: حمادي الجبالي‎, Ḥammādī al-Jibālī; born 12 January 1949) is a Tunisian engineer, Islamist politician and journalist who was Prime Minister of Tunisia from December 2011 to March 2013. He was the Secretary-General of the Ennahda Movement, a moderate Islamist party in Tunisia, until he left his party in December 2014 in the course of the 2014 Tunisian presidential election.

Born in Sousse in 1949,Jebali received his bachelor's degree in mechanical engineering from the Tunis University and added a masters programme in photovoltaic engineering in Paris, France. As a specialist in solar energy and wind power, he founded his own enterprise in Sousse.

In 1981 he became involved with Tunisia's Islamist movement, then called Movement of the Islamic Tendency. He was director and editor-in-chief of Al-Fajr (Dawn), the former weekly newspaper of the Islamist Ennahda Party. Moreover he served as longtime member of the party's executive council and remains secretary-general of Ennahda.

In June 1990, Al-Fajr published an article by Rashid al-Ghannushi called "The people of the State or the State of the People?" Jebali was made responsible for the publication and received a suspended sentence and a 1,500 dinars fine for the offences of "encouraging violation of the law" and "calling for insurrection". In November 1990, the Islamist newspaper contained an essay by the lawyer Mohammed Nouri, entitled "When will military courts, serving as special courts, be abolished?" This time, a military court sentenced Hamadi Jebali to one year in prison for "defamation of a judicial institution".

In May 1992 the government claimed that it had detected plans for a coup d'état by Ennahda, which had allegedly plotted to kill President Ben Ali and establish an Islamic state. In August 1992, Jebali, along with 170 other sympathisers of Ennahda, was charged with "attempted overthrow". Jebali protested that he had no knowledge of the plot's existence, and asserted that he had been tortured, presenting marks on his body for evidence. The trial was classified as unfair by observers for Human Rights Watch, the Lawyer's Committee for Human Rights, and Amnesty International, the latter of which named Jebali a prisoner of conscience. Eventually, on 28 August 1992 Hamadi Jebali was sentenced to a prison term of 16 years for "membership in an illegal organisation" and "attempted change of the nature of the state". The Court of Cassation confirmed the verdict.

The conditions of his imprisonment were harsh. More than ten of the 15 years that Jebali spent, were in solitary confinement. Hamadi Jebali engaged in several hunger strikes to protest against the conditions and his conviction. Two of them lasted for 36 days each. In February 2006, on the occasion of the 50th anniversary of Tunisia's independence, Jebali was conditionally released.

Following the Tunisian revolution in January 2011, Ennahda was legalised. Since then, Hamadi Jebali has been present in public as the party's secretary-general and spokesman. In May 2011, he went to Washington, D.C. in the US at the invitation of the Center for the Study of Islam and Democracy. He also met U.S. Senators John McCain and Joe Lieberman.

Ensuing Ennahda's success in the Constituent Assembly election on 23 October 2011, the party nominated him as its candidate for prime minister. Jebali is considered a proponent of the reformist wing of his party.

Interim President Moncef Marzouki appointed Jebali as Prime Minister of Tunisia on 14 December 2011. He presented his government on 20 December. He officially took office on 24 December.

On 19 February 2013, he resigned his office. The move followed his attempt to form a technocratic government following the assassination of Chokri Belaid and ensuing protests against the alleged Islamisation of the country. Ennahda, however, rejected his resignation insisting on a government of politicians and Jebali formally resigned after a meeting with President Moncef Marzouki saying it was in the best interests of the country. He said: "I promised if my initiative did not succeed I would resign as head of the government, and this is what I am doing following my meeting with the president. Today there is a great disappointment among the people and we must regain their trust and this resignation is a first step." Party leader Rachid Ghannouchi then suggested a government of politicians and technocrats, while Jebali suggested that if he was tasked with forming a new government it would have to include non-partisan ministers and a variety of political representation that would lead to a new election. Unnamed opposition figures welcomed the resignation. The same day, Standard & Poor downgraded Tunisia's credit rating. However, the IMF said that it was still in talks for a US$1.78 billion loan to the country.

After urging his party without success to support the interim president Moncef Marzouki in the presidential election of 2014, he left Ennahda on 10 December 2014. In January 2015, he refused to join the new party of the losing presidential candidate Marzouki but did not rule out founding a party of his own.