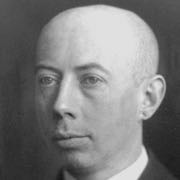 Gustav Ludwig Hertz (22 July 1887 – 30 October 1975) was a German experimental physicist and Nobel Prize winner for his work on inelastic electron collisions in gases, and a nephew of Heinrich Rudolf Hertz.

Hertz was born in Hamburg, the son of Auguste (née Arning) and a lawyer, Gustav Theodor Hertz (1858–1904), Heinrich Rudolf Hertz' brother. He attended the Gelehrtenschule des Johanneums before studying at the Georg-August University of Göttingen (1906–1907), the Ludwig Maximilian University of Munich (1907–1908), and the Humboldt University of Berlin (1908–1911). He received his doctorate in 1911 under Heinrich Leopold Rubens.

From 1911 to 1914, Hertz was an assistant to Rubens at the University of Berlin. It was during this time that Hertz and James Franck performed experiments on inelastic electron collisions in gases, known as the Franck–Hertz experiments, and for which they received the Nobel Prize in Physics in 1925.

During World War I, Hertz served in the military from 1914. In 1915 he joined Fritz Haber's unit that would introduce poisonous chlorine gas as a weapon. He was seriously wounded in 1915. In 1917, he returned to the University of Berlin as a Privatdozent. In 1920, he took a job as a research physicist at the Philips Incandescent Lamp Factory in Eindhoven, which he held until 1925.

In 1925, Hertz became ordinarius professor and director of the Physics Institute of the Martin Luther University of Halle-Wittenberg. In 1928 he became ordinarius professor of experimental physics and director of the Physics Institute of the Technische Hochschule Berlin ("THB"), now Technical University of Berlin. While there, he developed an isotope separation technique via gaseous diffusion. Since Hertz was an officer during World War I, he was temporarily protected from National Socialist policies and the Law for the Restoration of the Professional Civil Service, but eventually the policies and laws became more stringent, and at the end of 1934, he was forced to resign his position at THB, as he was classified as a "second degree part-Jew" (his paternal grandfather Gustav Ferdinand Hertz (originally named David Gustav Hertz) (1827–1914) had been Jewish as a child, before his whole family had converted to Lutheranism in 1834). He then took a position at Siemens, as director of Research Laboratory II. While there, he continued his work on atomic physics and ultrasound, but he eventually discontinued his work on isotope separation. He held this position until he departed for the Soviet Union in 1945.

In the Soviet Union

Hertz was concerned for his safety and, like his fellow Nobel laureate James Franck, was looking to move to the USA or any other place outside Germany. So he made a pact with three colleagues: Manfred von Ardenne, director of his private laboratory Forschungslaboratorium für Elektronenphysik, Peter Adolf Thiessen, ordinarius professor at the Humboldt University of Berlin and director of the Kaiser-Wilhelm Institut für physikalische Chemie und Elektrochemie (KWIPC) in Berlin-Dahlem, and Max Volmer, ordinarius professor and director of the Physical Chemistry Institute at the THB. The pact was a pledge that whoever first made contact with the Russians would speak for the rest. The objectives of their pact were threefold: (1) Prevent plunder of their institutes, (2) Continue their work with minimal interruption, and (3) Protect themselves from prosecution for any political acts of the past. Before the end of World War II, Thiessen, a member of the Nazi Party, had Communist contacts.

In his first meeting with Lavrentij Beria, von Ardenne was asked to participate in building the bomb, but von Ardenne quickly realized that participation would prohibit his repatriation to Germany, so he suggested isotope enrichment as an objective, which was agreed to.

By the end of the 1940s, nearly 300 Germans were working at the institute, and they were not the total work force. Institute A was used as the basis for the Sukhumi Physical-Technical Institute in Sinop, a suburb of Sukhumi. Volmer went to the Scientific Research Institute No. 9 (NII-9). in Moscow; he was given a design bureau to work on the production of heavy water. In Institute A, Thiessen became leader for developing techniques for manufacturing porous barriers for isotope separation.

In 1949, six German scientists, including Hertz, Thiessen, and Barwich were called in for consultation at Sverdlovsk-44, which was responsible for uranium enrichment. The plant, smaller than the American Oak Ridge gaseous diffusion plant, was getting only a little over half of the expected 90% or higher enrichment.

After 1950, Hertz moved to Moscow. In 1951, Hertz was awarded a Stalin Prize, second class, with Barwich. In that year, James Franck and Hertz were jointly awarded the Max Planck Medal by the Deutsche Physikalische Gesellschaft. Hertz remained in the Soviet Union until 1955.

Return to the GDR

Upon return from the Soviet Union, Hertz became ordinarius professor at the University of Leipzig. From 1955 to 1967, he was also the chairman of the Physical Society of the Deutsche Demokratische Republik (GDR); he was honorary chairman from 1967 to 1975.

Gustav Hertz was a nephew of Heinrich Rudolf Hertz and a cousin of Mathilde Carmen Hertz. In 1919, Hertz married Ellen née Dihlmann, who died in 1941. They had two sons, Carl Helmut Hertz and Johannes Heinrich Hertz; both became physicists.

The contents of this page are sourced from Wikipedia article on 08 Mar 2020. The contents are available under the CC BY-SA 4.0 license.
View Gustav Ludwig Hertz 's image gallery
Image Gallery