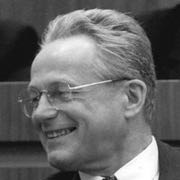 He was born in Alt Beelitz, (today Stare Bielice, Poland). In 1950 he joined the Democratic Farmers' Party of Germany (Demokratische Bauernpartei Deutschlands). From 1952 to 1955 he studied Economics.

From 1977 to 1990 he was a member of the Presidium of the Democratic Farmers' Party of Germany (DBD). On 27 March 1987 Maleuda became chairman of the DBD and at the same time a deputy chairman of the Council of State.

On 13 November 1989 he was the successor of Horst Sindermann as President of the People's Chamber (until March 1990). Maleuda supported the reforms and took part in the round table negotiations.

Although his party merged with the CDU in October 1990, Maleuda refused to be a member of the Christian Democratic Union.

In 1994 he was elected as a (non-party) member of the Bundestag (German Parliament) on the PDS list. He stayed a member until 1998.

The contents of this page are sourced from Wikipedia article on 08 Mar 2020. The contents are available under the CC BY-SA 4.0 license.
comments so far.
Comments
Reference sources
References
http://www.berliner-zeitung.de/berlin/guenther-maleuda-frueherer-ddr-funktionaer-maleuda-tot,10809148,16667200.html
https://www.nytimes.com/1989/11/14/world/clamor-east-contrite-government-contrite-deputies-say-party-failed-east-germans.html?pagewanted=2
https://www.nytimes.com/1994/10/19/world/germany-s-ex-communists-promise-to-behave-in-parliament.html?pagewanted=1
https://deepl.com
https://translate.google.com/
Trending today in