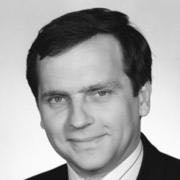 Günther Krause (born 3 September 1953) is a German engineer, academic, politician and businessman. He was Germany's minister of transport from 1991 to 1993.

Krause is a native of Güstrow near Mecklenburg, East Germany. He was born on 3 September 1953 in Halle. He received PhD in engineering from Wismar University of Technology, Business and Design in 1987.

Krause joined the Christian Democratic Union (CDU) of East Germany in 1975. He worked as an engineer on computerized planning in housing in Rostock. In 1982, he began to work at his alma mater, Wismar Technology University and was promoted to the professorship in computer science. Then he became the CDU state chairman from Mecklenburg-Western Pomerania. He served as state secretary and the chief unity negotiator for East Germany's only freely elected government headed by Lothar de Maizière. Krause was also senior advisor to Maizière. The Unification Treaty was signed by West German Interior Minister Wolfgang Schauble and Krause on 31 August 1990.

Following the reunification of West and East Germany Krause served at the Bundestag and in its committee on research and technology. He was appointed minister of transport on 18 January 1991 in the Helmut Kohl's fourth cabinet. He was the most prominent eastern German politician in the government and one of the three ministers from East Germany in addition to Angela Merkel (CDU; Minister for Women and Youth) and Rainer Ortleb (FDP; Minister of Education). Krause resigned from the office on 6 May 1993 after his alleged involvement in scandals, and was replaced by Matthias Wissmann, another CDU member. Krause was the eighth minister to quit the Kohl cabinet in the past 13 months.

In 1993, Krause resigned from politics and public office and began to deal with business. As of 2010, he heads a company on information, advice and project development that is based in Kirchmöser, a district of Brandenburg.

Krause married twice and has six children, three from the previous marriage. He lives in Admannshagen in Mecklenburg-Vorpommern with his second wife.