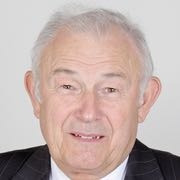 Günther Beckstein ([ˈɡʏntɐ ˈbɛkʃtaɪn]) (born 23 November 1943 in Hersbruck) is a German CSU politician from Bavaria and was the 17th Minister President of Bavaria from 9 October 2007 to 27 October 2008. He is well known for his outspoken views on law and order.

After graduating from High School at the Willstätter Gymnasium in Nuremberg in 1962, he studied law at the University of Erlangen-Nuremberg and Ludwig Maximilian University of Munich. He holds a Ph.D. from Erlangen-Nürnberg University. In 1975, he wrote his dissertation Der Gewissenstäter im Strafrecht und Strafprozessrecht (The Delinquent of Conscience in Criminal Law and Trial Law) which led to his Ph.D. Between 1971 and 1978, he worked as a lawyer.

Beckstein has been married to Marga Beckstein, a teacher, since 1973. They have three children: Ruth, Frank and Martin. Beckstein and his wife are residents of Nürnberg-Langwasser. He is a Protestant and an active church member.

Beckstein became a member of the Bavarian State Parliament, the Landtag, for the CSU in 1974. In 1987 he ran for Oberbürgermeister (Lord Mayor) of his home town Nürnberg, but lost to his opponent Peter Schönlein (SPD). In 1988, Beckstein became State Secretary at the Bavarian Ministry of Interior (Bayerisches Staatsministerium des Innern). In 1993, he became the Interior Minister of Bavaria, succeeding Edmund Stoiber. In 2001, he was elected to the post of Deputy Minister-President of Bavaria.

Beckstein won seat in the Bundestag in the 2005 German federal elections but did not take up this position, preferring to stay in state politics.

After Minister-President Edmund Stoiber had announced on 18 January 2007 to resign from his post in the autumn of 2007, the CSU Landtag fraction came to the arrangement for Beckstein to succeed Stoiber, after a power struggle with Erwin Huber, selecting him with a vast majority. On October 9, the Bavarian Landtag elected him as the new Minister-President by a majority of 122 of the 178 votes cast.

On 1 October 2008, following the Bavarian state elections of 28 September, where his party lost its absolute majority of the seats for the first time in 46 years, Beckstein resigned from his post but remained in office until a new Minister-President was elected on 27 October.

Beckstein was a CSU delegate to the Federal Convention for the purpose of electing the President of Germany in 2017.