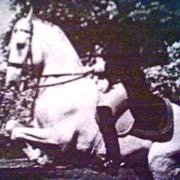 Gottlieb Polak (born January 13, 1883 in Kladruby nad Labem, died July 5, 1942 in Vienna) was Chief Rider and Riding Master of the Spanish Riding School in Vienna during the 1930s, serving until his death in 1942.

Polak was a multitalented individual who played the violin as well as being an extremely talented rider, described as having a gift for working with horses that occurs only rarely throughout history.

Polak was born in Kladruby nad Labem. He was the son of an employee (HofgestĂĽtsbeamter) of the Kladrub Court stud, and developed a great fondness for horses from an early age. When he was a young man, his love for horses was so great that he dropped out of the Music Academy in Prague after a year and in 1900 became a pupil at the Kladruber Stables. In 1902, he entered the Imperial "Marstall" in Vienna. After military service with the 11th Lancers in Pardubice from 1904 to 1907, he was transferred, in 1908, to the Campaign Riding School (Hofstallungen) in Vienna, where he served Archduke Franz Ferdinand of Austria as one of his many duties.

In his twenties, Polak showed extraordinary riding talent. In 1917, he was admitted to the Spanish Riding School as a student (Reitskolar). In 1920 he was promoted to the rank of Rider (Bereiter), then in 1927 to Chief Rider (Oberbereiter) and in 1941, replacing Wenzel Zrust, to First Chief Rider (Erster Oberbereiter). His work was further recognized by the school with his promotion to Riding Master (Reitmeister). He was the first person to serve in this newly created position.

Polak's outstanding dressage skills were honored with the award of the German Riding Badge in Gold and the Swedish Order of Vasa. His most famous student was Alois Podhajsky, who later became Director of the school. Podhajsky trained at the Riding School before he participated in Dressage at the 1936 Olympic Games in Berlin.

On May 10, 1942, Polak was beginning a public performance on his young stallion Pluto Theodorosta, but fell from the horse, unconscious, after only a few strides, possibly due to a heart attack. He died a month later, on July 5.

The contents of this page are sourced from Wikipedia article on 10 Mar 2020. The contents are available under the CC BY-SA 4.0 license.
comments so far.
Comments
Reference sources
References
http://www.srs.at/index.php?id=322
http://www.lipizzan.com/teacher.html
Trending today in