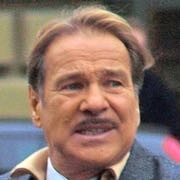 George was born in Berlin into a well known acting family: his father, Heinrich George, was a film and theater actor, and his mother, Berta Drews, a character actress. George is named after his father's favorite, Imperial Knight Götz von Berlichingen. His father was imprisoned by the Soviets and starved in the Soviet concentration camp Sachsenhausen Speziallager Nr. 7 Sachsenhausen. George grew up in Berlin with his elder brother Jan and his mother. He attended school in Berlin-Lichterfelde and later attended the Lyzeum Alpinum in Zuoz, Switzerland. He was married to Loni von Friedl from 1966 to 1976; the couple's daughter, Tanja-Nicole, was born in 1967. Since 1997 he lived together with Hamburg journalist Marika Ullrich ; the couple married in 2014.

George made his stage debut in 1950, performing a role in William Saroyan's My Heart's in the Highlands. From 1955 to 1958 he also studied at the Berlin UFA-Nachwuchsstudio, though he received the crucial part of his acting education between 1958 and 1963. Following his mother's advice he occasionally played at the Deutsches Theater in Göttingen under the direction of Heinz Hilpert. After Hilpert's death, George would never join a fixed theater company again, although he did regularly perform on tours and as a guest performer.

Hansgünther Heyme signed him in 1972 to the Kölner Schauspielhaus, where George played Martin Luther in Dieter Forte's Martin Luther und Thomas Münzer. His most important stage achievement, in his own opinion, was the lead role in Büchner's Danton's Death during the Salzburg Festival in 1981. In 1986 and 1987 George, together with Eberhard Feik and Helmut Stauss, stage-managed Gogol's The Government Inspector. Performing in Anton Chekhov's Platonov, George went on his last theater tour.

In 1953 he was able to get a small film role next to Romy Schneider in When the White Lilacs Bloom Again. In the same year he played, as he would often do from then on, next to his mother in Shakespeare's Richard III. After small movie parts during the 1950s, Götz George broke through with audiences and critics in the film Jacqueline (1959). George was awarded the Bundesfilmpreis and the Preis der Filmkritik for his role. In 1962 he received the Bambi Award as the most popular actor.

In the sixties, George got the chance to show that he is able to do more than playing sappy peasants, through roles in movies such as Kirmes, playing a desperate Wehrmacht deserter, and Herrenpartie. More often, though, he performed in comedies and action-oriented movies which benefited from his physical presence. He became well known to a broad audience when, during his theater tour in Göttingen, Horst Wendlandt persuaded him to play in one of the Karl May series of films, which he started in 1962 with Der Schatz im Silbersee. It was originally planned to give him the lead role, but this plan was abandoned when Lex Barker was hired to play the role of Old Shatterhand, so George played the farmer son Fred Engel. George performed all stunts himself, even in his lead role as sheriff in Sie nannten ihn Gringo.

In the 1970s he turned primarily to stage roles and to television, including the many episodes of Der Kommissar, Tatort, Derrick, and The Old Fox for which he would become famous. It was not until 1977 that he was cast in a prominent role again, playing Franz Lang in Death is My Trade, a character modeled after Auschwitz commander Rudolf Höß.

George probably had his greatest popular success in the eighties on TV: in Tatort episodes of the WDR, broadcast from 1981 to 1991, he portrayed proletarian police officer Horst Schimanski, who eventually became a cult figure in Germany. In 1984 and 1987 he again won the Bambi Award as the most popular actor. The series of Schulz & Schulz movies, starting in 1989 and dealing with the issue of the German reunification, gave him the opportunity to show his talents as a comedian in a double role, as did the role of the industry consultant Morlock [de] in the series of the same name, which is rather far removed from the roughneck charm of senior commissar Schimanski.

Among George's most impressive roles in the nineties were his appearances in the television movie Der Sandmann [de], in which he portrayed the alleged serial killer and writer Henry Kupfer as a cold, calculating and manipulative intellectual, the movie Deathmaker (Der Totmacher), in which he portrayed Fritz Haarmann (The Butcher of Hanover), and in the television movie Die Bubi-Scholz-Story (based on Bubi Scholz), the trauma of an aged, broken boxer.

George died at the age of 77 after a short illness.