Giuseppe Gabrielli (26 February 1903 – 29 November 1987) was an Italian aeronautics engineer. He is famous as the designer of numerous Italian military aircraft, including the FIAT G.50 and G.55 World War II fighters.

He was born in Caltanissetta, Sicily, and studied at the Politecnico di Torino and in Aachen, Germany under Theodore von Karman. Gabrielli began his work as designer at Piaggio, but was soon called to FIAT by Giovanni Agnelli to lead his aeronautics section.

Gabrielli designed 142 aircraft, all bearing his initial, including the G.50, the G.55 (one of the best fighters in World War II), the G.80 (one of the first jets designed in Italy), the Aeritalia G.91, which won a contest for a NATO standard fighter in the 1950s, and the G.222, a military transport airplane, whose design was later evolved into the C-27J Spartan (with the addition of new engines and new avionics to the airframe).

Gabrielli was awarded the Ludwig-Prandtl-Ring from the Deutsche Gesellschaft für Luft- und Raumfahrt (German Society for Aeronautics and Astronautics) for "outstanding contribution in the field of aerospace engineering" in 1967.

The contents of this page are sourced from Wikipedia article. The contents are available under the CC BY-SA 4.0 license.
View Giuseppe Gabrielli 's image gallery
Image Gallery 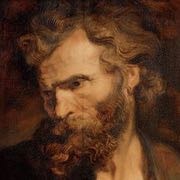 One of the Twelve Apostles of Jesus; traditionally identified with Jude the brother of Jesus