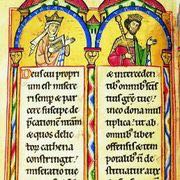 Gertrude of Merania
The basics

Gertrude of Merania (1185 – 28 September 1213) was Queen of Hungary as the first wife of Andrew II from 1205 until her assassination. She was regent during her husband's absence.

She was the daughter of the Bavarian Count Berthold IV of Andechs, who had been elevated to the title Duke of Merania by Emperor Frederick Barbarossa, and his wife Agnes from the Saxon House of Wettin. Gertrude's elder sister was Agnes of Merania, a famous beauty, who married King Philip II of France. Her younger sister was St. Hedwig of Silesia, wife of the Piast duke Henry I the Bearded, the later High Duke of Poland. Their brother was Otto, who succeeded their father as Duke of Merania.

Her parents wanted their daughters to all make important political marriages, which would create alliances for Duke Berthold IV. Gertrude married the Árpád prince Andrew II, younger son of late King Béla III of Hungary, before 1203. Andrew thereby took sides in the conflict over the German throne, joining his father-in-law in his support of Duke Philip of Swabia, while his elder brother King Emeric of Hungary backed King Otto IV of Germany.

The couple had five children:

Ambitious Gertrude exerted much political influence over her husband. It was probably she who persuaded Andrew to conspire against his brother again, but when King Emeric, who had realised that Andrew's troops outnumbered his armies, went unarmed, wearing only the crown and the sceptre, to Andrew's camp near Varasd, Andrew surrendered voluntarily on the spur of the scene. The king had his brother arrested, but Andrew managed to escape shortly afterwards. During this time, Gertrude was sent back to her father. Things improved for her, when Prince Andrew took over the government of the Hungarian kingdom upon the death of King Emeric in 1204, officially as regent for his minor nephew Ladislaus III, who nevertheless died driven in exile one year later.

Gertrude was killed in 1213, by Hungarian noblemen (magnates), who were jealous over the advancement of her German relatives at court. While the king was in battle, Gertrude gave out Hungarian land as "gifts" to her favorites. According to medieval chroniclers, one third of the country was given away but the magnates got it back after the queen's death. Thus, Hungary did not prosper. During the frequent absence of her husband, the queen was regent and, as Dietrich of Apolda states, conducted the affairs of the kingdom "like a man". In 1206 her younger brother Berthold was installed as Archbishop of Kalocsa, in 1212 he was also appointed Voivode of Transylvania.

While King Andrew was campaigning in Galicia, the Hungarian nobles, led by Peter, son of Töre decided to get rid of the queen and in 1213 on a hunt with Berthold and their guest Duke Leopold VI of Austria in the Pilis Mountains, she was killed. Gertrude's body was torn to pieces, her brother and Duke Leopold narrowly escaped with their lives. Due to the current political situation most of her murderers remained unpunished during the rule of Andrew II. Only Gertrude's son King Béla IV took revenge after his accession to the throne.

Gertrude's tomb was of a Gothic style. Her tomb was excavated between 1967 and 1980.

She is the main character in Ferenc Erkel's opera, Bánk bán. It is based on a true fact: Lord Bánk, a nobleman went touring the country on Gertrude's order, while the king was on crusade. His young wife stayed at home. Gertrude's brother fell in love with the young woman but she was afraid of him. Gertude encouraged her brother. When Lord Bánk heard of this, he was very angry and he was leader of the group of men that killed the queen. Her brother fled for his life.

The contents of this page are sourced from Wikipedia article on 08 Mar 2020. The contents are available under the CC BY-SA 4.0 license.
View Gertrude of Merania 's image gallery
Image Gallery