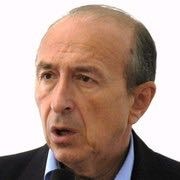 Gérard Collomb (born 20 June 1947) is a French politician of the Socialist Party. He currently serves as Mayor of Lyon (previously occupied this post from March 2001 to July 2017) and was from May 2017 until October 2018 the Minister of the Interior in the Philippe Government. Unhappy with President Emmanuel Macron's government, Collomb resigned in order to run again for mayor of Lyons. He is currently municipal councillor for the city of Lyon and councillor for the Metropolis of Lyon.

Collomb was elected as a Socialist municipal councillor for the 9th arrondissement of Lyon in the 1977 French municipal elections, and has been re-elected six times since then. In 1981, aged 34, he was elected to the French National Assembly. He was re-elected in 1986 but lost his seat in 1988. From 1989 on, he led by the municipal opposition to Michel Noir on the Lyon municipal council. From 1992 to 1999 he also served as regional councillor for the Rhône-Alpes region, before his resignation.

Collomb was defeated in the 1995 local elections in Lyon, and became Mayor of the 9th arrondissement and Vice-President of the Urban Community of Lyon, until 2001. He ran as leader of the Plural Left list in the 2001 local elections. He was elected Mayor on 25 March and also elected as president of the Urban Community of Lyon, a post he held until 2014. Among the projects he has implemented is the Vélo'v.

Ahead of the 2008 Reims Congress, Collomb led the "Hope on the left, proud to be Socialist" (French: L'espoir à gauche, fier(e)s d'être socialistes) motion of behalf of Ségolène Royal. He was a finalist for the 2010 World Mayor prize.

Collomb was one of Emmanuel Macron's first close allies and vocal supporters among leading Socialists ahead of the 2017 presidential elections. On 17 May 2017, he was named Minister of the Interior in the Philippe Government. Lyon Deputy mayor Georges Képénékian was elected as Lyon mayor succeeding Collomb.

In October 2018, Collomb prevailed in resigning in order to run again for mayor of Lyons. He was quoted saying of Macron, ‘Very few of us can still talk to" him.

Collomb was "recently revealed to have said in private that France risked a civil war unless immigration, legal and illegal, was sharply curtailed within the next five years". As minister he had "talked about France being 'flooded' by immigrants—a term frequently used by" past National Rally presidential candidate Marine Le Pen. After touring parts of Marseille, Toulouse and Paris as minister, Collomb had said, “The situation is very difficult" and used the phrase "Reconquering the Republic” to frame the challenge facing the country.