Georgy Tovstonogov was born in Tbilisi, Russian Empire (now Georgia), or in St. Petersburg on September 28, 1915, to a Russian noble and a Georgian classical singer Tamara Papitashvili.

In 1938 he graduated from the State Institute of Theatrical Art in Moscow. From 1938 to 1946, he worked as a director in the Tbilisi Griboedov Theater, from 1946 to 1949 in the Central Children's Theater in Moscow, from 1950 to 1956 in the Leningrad Leninsky Komsomol Theater, and from 1956 until his death in 1989 in the Bolshoi Academic Gorky Theater. He was a professor at the Leningrad Institute for Theatre, Music and Cinema since 1960. In 1957 he became a People's Artist of the USSR. He won the Stalin Prize thrice (1950, 1952, 1956), and got two Orders of Lenin and many other Soviet awards. In 1972, he produced the book The Profession of the Stage-Director, which is the best example of his directing style, and in which he shares his honest opinions on Lee Strasberg and Konstantin Stanislavsky. On May 23, 1989 Tovtonogov died of heart attack in his car returning home after general rehearsal of his new production The Visit by Friedrich Dürrenmatt. Monument to Tovstonogov on Tikhvin Cemetery in Saint Petersburg

Tovstonogov was the first who returned Fyodor Dostoevsky into Soviet theater, by his productions of The Insulted and Humiliated (1956 in Leningrad Leninsky Komsomol Theater) and The Idiot (1957 in Gorky Theater).

Among other famous performances are:

He was also responsible for producing mass spectacles.

During his prime Tovstonogov was considered one of the best theatre directors of Europe. The prominent members of his troupe include Alice Freindlich, Zinaida Sharko, Lyudmila Makarova, Tatiana Doronina, Svetlana Kryuchkova, Kirill Lavrov, Innokenty Smoktunovsky, Pavel Luspekaev, Yefim Kopelyan, Sergey Yursky, Vladislav Strzhelchik, Evgeny Lebedev, and Oleg Basilashvili. His contribution to the Russian tradition of theatre education is important, especially where it comes to education of theatre directors. His theories continue to have large influence, especially in Russian and Scandinavian theatre education. 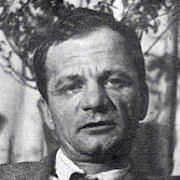