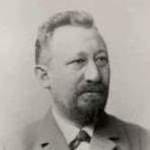 Wissowa studied classical philology under August Reifferscheid at the University of Breslau, then furthered his studies in Munich under Heinrich Brunn, a leading authority on Roman antiquities. In 1890 he became a full professor at the University of Marburg, relocating to Halle in 1896 as a successor to Heinrich Keil.

Georg Wissowa is remembered today for re-edition of Realencyclopädie der Classischen Altertumswissenschaft, an encyclopedia of classical studies initially started by August Friedrich Pauly (1796–1845) in 1837. Around 1890, Wissowa began the new edition, an ambitious project that he anticipated would take ten years to finish. However, it wouldn't be until the 1970s that the last of its 83 volumes was published.

He was the author of a significant work on ancient Roman religion, titled Religion und Kultus der Römer (1902), which appeared also in a second revised edition (1912), a book in which he explored the development of Roman religion, and in the process, provided a comprehensive description of its deities and religious practices. Wissowa also published a revision of Ludwig Friedländer's moral history of Rome called Darstellungen aus der Sittengeschichte Roms, worked on Wilhelm Heinrich Roscher's encyclopedia of Greek and Roman mythology, Ausführliches Lexikon der griechischen und römischen Mythologie" and edited the second edition of Joachim Marquardt's "Römische Staatsverwaltung, vol. III. (1885).

The contents of this page are sourced from Wikipedia article on 08 Mar 2020. The contents are available under the CC BY-SA 4.0 license.
View Georg Wissowa 's image gallery
Image Gallery