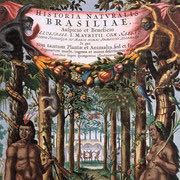 Born in Liebstadt in the Electorate of Saxony, Marcgrave studied botany, astronomy, mathematics, and medicine in Germany and Switzerland until 1636 when he journeyed to Leiden in the Netherlands.

In 1637, he was appointed astronomer of a company being formed to sail to the Dutch Brazil. He was accompanied by Willem Piso, a physician. He afterward entered the service of Dutch Brazil's governor, Johan Maurits van Nassau-Siegen, whose patronage provided him with the means of exploring a considerable part of Brazil. He arrived in Brazil in early 1638 and undertook the first zoological, botanical, and astronomical expedition there, exploring various parts of the colony to study its natural history and geography. Traveling later to the coast of Guinea, he fell a victim to the climate.

His large map of Brazil, an important event in cartography was published in 1647. According to Cuvier, Marcgrave was the most able and most precise of all those who described the natural history of remote countries during the sixteenth and seventeenth centuries.

He was the co-author (with Willem Piso) of Historia Naturalis Brasiliae, an eight-volume work on the botany and zoology of Brazil, that has had lasting influence in the history of science.