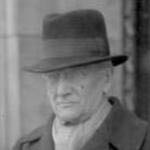 He served as a stretcher bearer in the Franco-Prussian war of 1870. He worked as a journalist on several newspapers after 1875. He joined the German Progress Party in 1882 and the Social Democratic Party of Germany (SPD) in 1891.

He had a romantic relationship with Lou Andreas-Salome between 1892 and 1894. During that period, Ledebour was sentenced and jailed for a year for a political offence.

Ledebour was a member of the German Reichstag from 1900 until 1918. He took part in the international anti-war socialist conferences at Zimmerwald in 1915, and in Stockholm in 1917. He was one of the leaders of the German Independent Social Democratic Party (USPD) after the split in the SPD in 1917. The Majority Social Democratic Party of Germany (MSPD) broadly supported the German government's war aims, and the USPD was opposed to the government.

In 1918-20, the leadership of the MSPD wanted to restrain the German revolution as much as possible, even to the extent of relying on the right-wing enemies of the democratic revolution and government, while the USPD wanted to carry through the revolution and weaken or remove anti-democratic forces. Ledebour was involved in the political leadership, along with Karl Liebknecht, of the attempt in Berlin to overthrow the government headed by Friedrich Ebert in January 1919. This was poorly organised and was quickly defeated by the units of the German army and the Freikorps, and notably led to the murder of both Karl Liebknecht and Rosa Luxemburg.