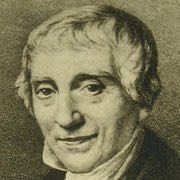 Georg Friedrich Grotefend (9 June 1775 – 15 December 1853) was a German epigraphist and philologist. He is known mostly for his contributions toward the decipherment of cuneiform.

He was born at Hann. Münden and died in Hanover. He was educated partly in his native town, partly at Ilfeld, where he remained till 1795, when he entered the University of Göttingen, and there became the friend of Heyne, Tychsen and Heeren. Heyne's recommendation procured for him an assistant mastership in the Göttingen gymnasium in 1797. While there he published his work De pasigraphia sive scriptura universali (1799), which led to his appointment in 1803 as prorector of the gymnasium of Frankfurt, and shortly afterwards as conrector. In 1821 he became director of the gymnasium at Hanover, a post which he retained till his retirement in 1849.

Grotefend was best known during his lifetime as a Latin and Italian philologist, though the attention he paid to his own language is shown by his Anfangsgründe der deutschen Poesie, published in 1815, and his foundation of a society for investigating the German tongue in 1817. In 1823/1824 he published his revised edition of Helfrich Bernhard Wenck's Latin grammar, in two volumes, followed by a smaller grammar for the use of schools in 1826; in 1835–1838 a systematic attempt to explain the fragmentary remains of the Umbrian dialect, entitled Rudimenta linguae Umbricae ex inscriptionibus antiquis enodata (in eight parts); and in 1839 a work of similar character upon Oscan (Rudimenta linguae Oscae). In the same year he published a memoir on the coins of Bactria, under the name of Die Münzen der griechischen, parthischen und indoskythischen Könige von Baktrien und den Ländern am Indus.

He soon, however, returned to his favourite subject, and brought out a work in five parts, Zur Geographie und Geschichte von Alt-Italien (1840–1842). Previously, in 1836, he had written a preface to Friedrich Wagenfeld's translation of the Sanchoniathon of Philo of Byblos, which was alleged to have been discovered in the preceding year in the Portuguese convent of Santa Maria de Merinhão.

But it was in the East rather than in the West that Grotefend did his greatest work. The cuneiform inscriptions of Persia had for some time been attracting attention in Europe; exact copies of them had been published by the Dutch artist Cornelis de Bruijn and the German traveller Niebuhr, who lost his eyesight over the work; and Grotefend's friend, Tychsen of Rostock, believed that he had ascertained the characters in the column, now known to be Persian, to be alphabetic.

At this point Grotefend took the matter up. His first discovery was communicated to the Royal Society of Göttingen in 1802, and reviewed by Tychsen two years afterwards. In 1815 he gave an account of it in Heeren's work on ancient history, and in 1837 published his Neue Beiträge zur Erläuterung der persepolitanischen Keilschrift. Three years later appeared his Neue Beiträge zur Erläuterung der babylonischen Keilschrift. His discovery may be summed up as follows:

A basis had now been laid for the interpretation of the Persian inscriptions. However, lacking knowledge of old Persian, Grotefend misconstrued several important characters. Significant work remained to be done to complete the decipherment. Building on Grotefend's insights, this task was performed by Eugène Burnouf, Christian Lassen and Sir Henry Rawlinson. This work of Grotefend was spurred on by a simple bet which Grotefend made with a friend.

The contents of this page are sourced from Wikipedia article on 08 Mar 2020. The contents are available under the CC BY-SA 4.0 license.
View Georg Friedrich Grotefend 's image gallery
Image Gallery