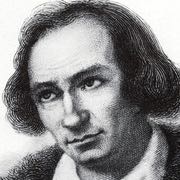 Georg Friedrich Daumer (Nuremberg, 5 March 1800 - Würzburg, 14 December 1875) was a German poet and philosopher. He was educated at the gymnasium of his native city, at that time directed by the famous philosopher Hegel. In 1817 he entered the University of Erlangen as a student of theology, but abandoned that study for philosophy. For a number of years Daumer was professor at the gymnasium of Nuremberg; owing to ill-health he was pensioned in 1832 and henceforth devoted himself entirely to literary work. While at Erlangen he came strongly under the influence of Pietism. Soon, however, he became sceptical and exhibited decided leanings towards pantheism. From an orthodox Protestant he gradually became a bitter enemy of Christianity, which he attacked in a number of writings and for which he strove to substitute a new religion "of love and peace", formulated in his work Religion des neuen Weltalters (Hamburg, 1850). Karl Marx and Frederick Engels joined in writing a critical review of Daumer's Die Religion des Neuen Weltalters in January through February 1850 which was published in the Neue Rheinische Zeitung: Politisch-Ökonomische Revue. Marx and Engels criticized Daumer's theory of history from class point of view. Instead of a struggle between economic classes in society, Daumer saw only a struggle between "coarseness" and "culture."

One of the most important parts of Daumer's work is his poetry. His Hafis (Hamburg, 1846; a second collection, 1852) contain graceful but very free imitations of the songs of the famous Persian poet. Some of them have become widely known through the musical settings of Brahms, such as the Liebeslieder and Neue Liebeslieder Waltzes. This collection, as well as Mahomed und sein Werk (Hamburg, 1848), is distinctly directed against the hypocrisy and asceticism which at that time Daumer believed to be inseparable from orthodox Christianity. Among other poems may be mentioned: Glorie der heiligen Jungfrau Maria (Nuremberg, 1841); Frauenbilder und Huldigungen (Leipzig, 1853); Marianische Legenden und Gedichte (Munster, 1859) and Schöne Seelen (Mainz, 1862).

Daumer was also known as host and teacher of the mysterious foundling Kaspar Hauser in 1828-30 and wrote several books about the case.

The contents of this page are sourced from Wikipedia article on 08 Mar 2020. The contents are available under the CC BY-SA 4.0 license.
View Georg Friedrich Daumer 's image gallery
Image Gallery