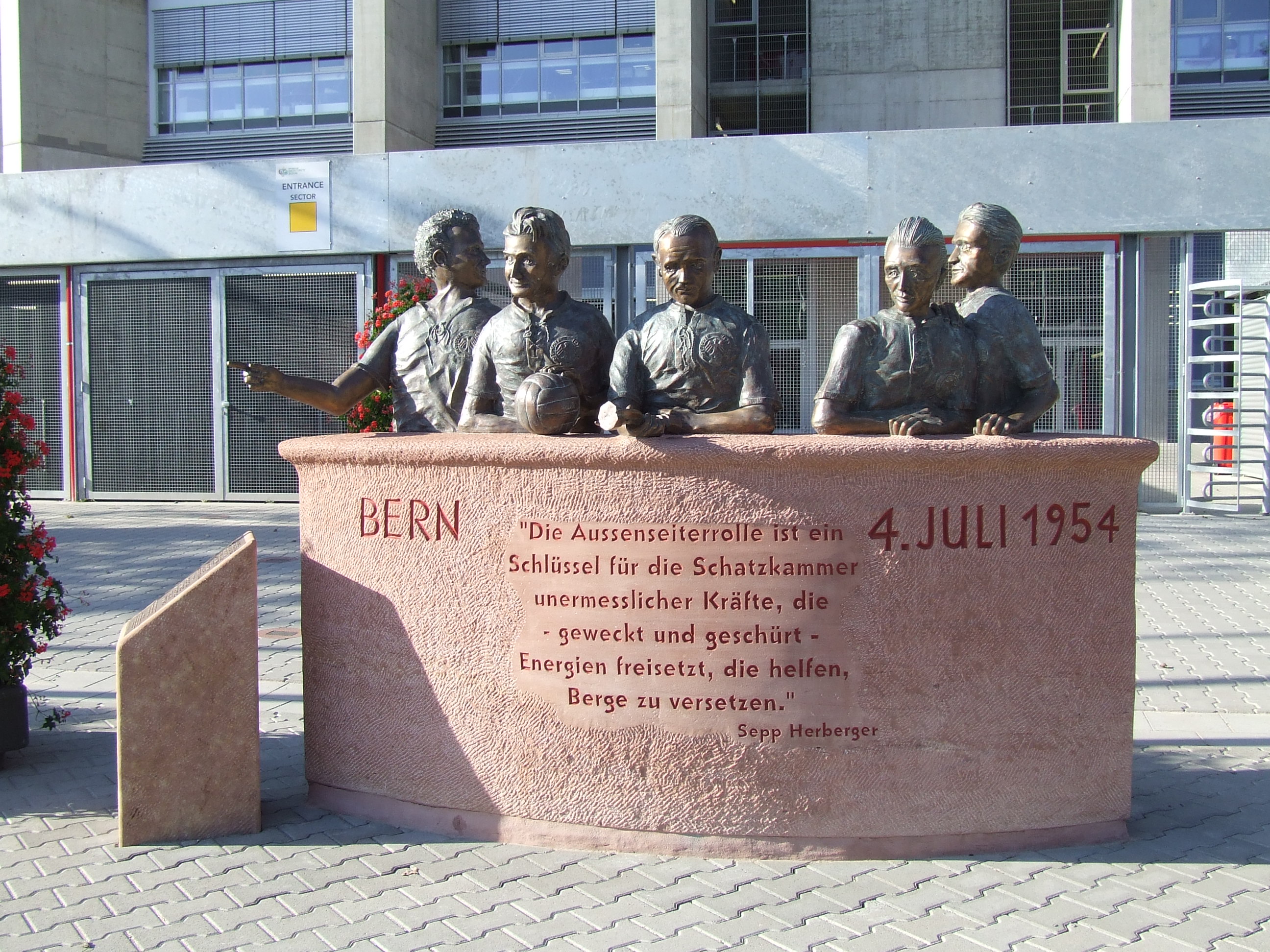 Friedrich "Fritz" Walter (31 October 1920 – 17 June 2002) was a German footballer. He usually played as an attacking midfielder or inside forward. In his time with the German national team, he made 61 caps and scored 33 goals, and was captain of the team that won the 1954 FIFA World Cup.

Walter was exposed to football early with his parents working at the 1. FC Kaiserslautern club restaurant. By 1928 he had joined the Kaiserslautern youth academy, and he made his first team debut at 17, continuing an association with the club that would be his only professional club.

International pro teams had repeatedly offered him hefty sums, but with support from his wife always declined in order to stay at home, to play for his home town, the national team and "Chef" (German for "boss") Herberger.

Walter debuted with the German national team in 1940 under Sepp Herberger, and scored a hat-trick against Romania.

Walter was drafted into the armed forces in 1942, however, the end of the war found 24-year-old Walter in a Prisoner of War camp in Maramures in which he played with Hungarian and Slovakian guards. When the Soviets arrived they in general took all German prisoners back to a Gulag in Soviet Union where life expectancy was about five years. Fortunately, one of the Hungarian prison guards had seen Walter playing for Germany, and told them that Fritz was not German but from the Saar Territory.

Upon his return in 1945, Walter, who by now suffering from malaria, again played for Kaiserslautern, leading them to German championships in 1951 and 1953. Sepp Herberger recalled him to the national team in 1951, and he was named captain.

He was captain of the West German team that won their first World Cup in 1954. Ironically, given the intervention of the Hungarian guards during the war, that win came over Hungary. He and his brother, Ottmar Walter, became the first brothers to play in a World Cup winning team.

But in 1956, after the crackdown by the Soviets of the Hungarian Uprising, the Hungarian football team were caught away from home, and for two years, Fritz managed their games and provided the financial backing and in small measure, paid them back for having saved his life. Walter received his last cap during the semi-final against Sweden in the 1958 World Cup, suffering an injury which ended his international career, and he retired from football in 1959. Fritz Walter on a 1988 Paraguay stamp

The home stadium of FC Kaiserslautern was renamed the Fritz-Walter-Stadion in 1985.

Fritz Walter was named an honorary captain of the German football squad in 1958. The other four are Uwe Seeler, Franz Beckenbauer, Lothar Matthäus and Bettina Wiegmann.

During the eighties and nineties, there was another successful Bundesliga striker called "Fritz Walter", who mainly played for VfB Stuttgart. Although he had no relationship to the great Kaiserslautern captain, sports fans jokingly called him "Fritz Walter junior".

Walter's wife of five decades was Italia Walter, a woman from Italy.

It was popular knowledge in Germany that Walter appeared to play better the worse the weather was, and so now the term "Fritz Walter's weather" is used to describe rainy weather conditions, often rendered with odd local dialect grammar "of Fritz, his weather". This is because he, as many other soldiers, had contracted malaria during the war, thus rendering him unable to stand the heat of the sun. The 1954 World Cup final was played in "Fritz Walter's weather" conditions.

On 6 October 1956 Walter scored a spectacular goal in Leipzig in front of 100,000 East Germans during a friendly against Wismut Aue, when he hit the ball back-heel while diving forward. [1]