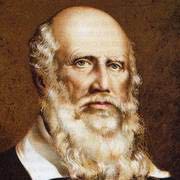 Friedrich Ludwig Jahn (11 August 1778 – 15 October 1852) was a German gymnastics educator and nationalist whose writing is credited with the founding of the German gymnastics (Turner) movement as well as influencing the German Campaign of 1813, during which a coalition of German states effectively ended the occupation of Napoleon's First French Empire. His admirers know him as Turnvater Jahn, roughly meaning "father of gymnastics" Jahn.

He was born in Lanz in Brandenburg, Prussia. He studied theology and philology from 1796 to 1802 at the Halle, Göttingen, and at the University of Greifswald. After the Battle of Jena–Auerstedt in 1806 he joined the Prussian army. In 1809, he went to Berlin, where he became a teacher at the Gymnasium zum Grauen Kloster and at the Plamann School.

Brooding upon what he saw as the humiliation of his native land by Napoleon, Jahn conceived the idea of restoring the spirits of his countrymen by the development of their physical and moral powers through the practice of gymnastics. The first Turnplatz, or open-air gymnasium, was opened by Jahn in Berlin in 1811, and the Turnverein (gymnastics association) movement spread rapidly. Young gymnasts were taught to regard themselves as members of a kind of guild for the emancipation of their fatherland. The nationalistic spirit was nourished in a significant degree by the writings of Jahn.

In the Early 1813 Jahn took an active part in the formation of the famous Lützow Free Corps, a volunteer force in the Prussian army fighting Napoleon. He commanded a battalion of the corps, but he was often employed in the secret service during the same period. After the war, he returned to Berlin, where he was appointed state teacher of gymnastics, and he took on a role in the formation of the student patriotic fraternities, or Burschenschaften, in Jena.

A man of populistic nature, rugged, eccentric and outspoken, Jahn often came into conflict with the authorities. The authorities finally realized he aimed at establishing a united Germany and that his Turner schools were political and liberal clubs. The conflict resulted in the closing of the Turnplatz in 1819 and Jahn's arrest. Kept in semi-confinement successively at Spandau, Küstrin, and at the fortress in Kolberg until 1824, he was sentenced to imprisonment for two years. The sentence was reversed in 1825, but he was forbidden to live within ten miles of Berlin.

He therefore took up residence at Freyburg on the Unstrut, where he remained until his death, with the exception of a short period in 1828, when he was exiled to Kölleda on a charge of sedition. While at Freyburg, he received an invitation to become professor of German literature at Cambridge, Massachusetts, which he declined, saying that “deer and hares love to live where they are most hunted.”

In 1840, Jahn was decorated by the Prussian government with the Iron Cross for bravery in the wars against Napoleon. In the spring of 1848, he was elected by the district of Naumburg to the German National Parliament. Jahn died in Freyburg, where a monument was erected in his honor in 1859.

Among his works are the following:

Jahn promoted the use of parallel bars, rings and the high bar in international competition. In honor and memory of him, some gymnastic clubs, called Turnvereine (German:Turnvereine), took up his name, the most well known of these is probably the SSV Jahn Regensburg.

A memorial to Jahn exists in St. Louis, Missouri, within Forest Park. It features a large bust of Jahn in the center of an arc of stone, with statues of a male and female gymnast, one on each end of the arc. The monument is on the edge of Art Hill next to the path running north and south along the western edge of Post-Dispatch lake. It is directly north of the St. Louis Zoo.

Other memorials to Jahn are located in Groß-Gerau, Germany; in Vienna, Austria; and in Inwood Park, in the Mt. Auburn neighborhood of Cincinnati. An elementary school in Chicago is named after Jahn.

In his own time Friedrich Jahn was seen by both supporters and opponents as a liberal figure. He advocated that the German states should unite after the withdrawal of Napoleon's occupying armies, and establish a democratic constitution (under the Hohenzollern monarchy), which would include the right to free speech. As a German nationalist, Jahn advocated maintaining German language and culture against foreign influence. In 1810 he wrote, "Poles, French, priests, aristocrats and Jews are Germany's misfortune." At the time Jahn wrote this, the German states were occupied by foreign armies under the leadership of Napoleon. Also, Jahn was "the guiding spirit" of the fanatic book burning episode carried out by revolutionary students at the Wartburg festival in 1817.

Jahn gained infamy in English-speaking countries through the publication of Peter Viereck's Metapolitics: The Roots of the Nazi Mind (1941). Viereck claimed Jahn as the spiritual founder of Nazism, who inspired the early German romantics with anti-Semitic and authoritarian doctrines, and then influenced Wagner and finally the Nazis.

However, Jacques Barzun observed that Viereck's portrait of cultural trends supposedly leading to Nazism was "a caricature without resemblance" relying on "misleading shortcuts".

Scholarly focus on the völkischness of Jahn's thought started in the 1920s with a new generation of Jahn interpreters like Edmund Neuendorff and Karl Müller. Neuendorff explicitly linked Jahn with National Socialism. The equation by the National Socialists of Jahn's ideas with their world view was more or less complete by the mid-1930s. Alfred Baeumler, an educational philosopher and university lecturer who attempted to provide theoretical support for Nazi ideology (through the interpretation of Nietzsche among others) wrote a monograph on Jahn in which he characterises Jahn's invention of gymnastics as an explicitly political project, designed to create the ultimate völkisch citizen by educating his body.

The contents of this page are sourced from Wikipedia article on 09 Mar 2020. The contents are available under the CC BY-SA 4.0 license.
View Friedrich Ludwig Jahn 's image gallery
Image Gallery