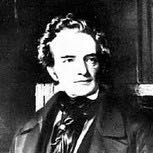 Friedrich Christoph Förster (24 September 1791 in Münchengosserstädt on the Saale – 8 November 1868 in Berlin) was a German historian and poet.

He was the second son of Karl Christoph Förster (1751-1811), and consequently an older brother of the painter Ernst Joachim Förster (1800-1885). He received his early education at Altenburg, and after a course of theology at Jena, devoted some time to archaeology and the history of art.

At the outbreak of the War of Liberation against Napoleon in 1813, he joined the Lützow Free Corps with Theodor Körner, quickly attaining the rank of captain. Like Körner, he wrote spirited war songs, which added to the national enthusiasm. On the conclusion of the war, he was appointed professor at the school of engineering and artillery in Berlin, but on account of some democratic writings he was dismissed from this office in 1817. He then became connected with various journals until about 1829, when he received an appointment at the royal museum in Berlin, with the title of court councillor (German: Hofrat). He was the founder and secretary of the Wissenschaftlicher Kunstverein in Berlin.

He brought out an edition of Hegel's works, adapted several of Shakespeare's plays for the theatre, wrote a number of poems and an historical drama, Gustav Adolf (Berlin, 1832).

Many of his lesser writings were collected and published as Kriegslieder, Romanzen, Erzählungen und Legenden (“War songs, romances, stories and legends,” Berlin, 1838). The beginning of an autobiography of Förster, edited by H. Kletke, has been published under the title, Kunst und Leben (“Art and Life,” Berlin, 1873).