Friedrich August Stüler (28 January 1800 – 18 March 1865) was an influential Prussian architect and builder. His masterpiece is the Neues Museum in Berlin, as well as the dome of the triumphal arch of the main portal of the Berliner Stadtschloss.

Stüler was born on 28 January 1800 in Mühlhausen. In 1818 he started studying architecture and became a student of Karl Friedrich Schinkel in Berlin. After travelling to France and Italy together with Eduard Knoblauch in 1829 and 1830 and to Russia together with Heinrich Strack in 1831, Stüler became Hofbauinspektor (Royal Buildings Inspector), Hofbaurat (Royal privy councillor for buildings) and director of the commission for the building of the Berliner Stadtschloss in 1832. In 1837, he planned the rebuilding of the Winter Palace in Saint Petersburg, but failed to realise these plans because Tsar Nicholas I of Russia decided to rebuild the original Baroque/Rococo palace instead of Stülers Neo-Renaissance concept. Stüler then returned to Berlin, where King Frederick William IV of Prussia opened a huge array of tasks to him, making him Architekt des Königs (Royal architect) in 1842.

Together with King Frederick William, who had previously (since his first journey to Italy in 1828) studied Italian architecture, Stüler incorporated Classical antiquity and Renaissance architecture in what was to become Prussian Arcadia. They also conceived a recourse to early Christian motives such as the liturgy of the Early church to avoid political problems with the contemporary church. After the death of Ludwig Persius, Stüler assumed control of the building of the Friedenskirche in Potsdam in 1845. Joint journeys to Italy of Stüler and King Frederick William in 1858/59 deepened the Italian influence from medieval and Quattrocento buildings. His ideas for Cast-iron architecture or the techniques he used for the Neues Museum are more likely influenced from a journey to England in 1842. The building was badly damaged during World War II, but was reopened in 2009.

Stüler died in Berlin, where he is buried in the Dorotheenstadt cemetery.

While many of the buildings Stüler built were destroyed in World War II, a few were restored – not in the original ways, but one can still see Stülers concepts on the outside, especially in the Jakobi church in Berlin.

Commonly, Stüler is viewed as a student of Karl Friedrich Schinkel as well as an architect of his own right, combining the wishes of Frederick William, Schinkels Classicism and the new Historicism of the Wilhelminian era, though he didn't refer to himself as a student of Schinkel. 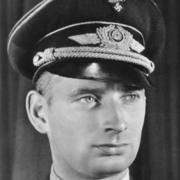