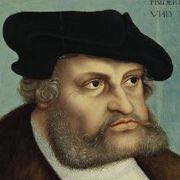 Frederick III (17 January 1463 – 5 May 1525), also known as Frederick the Wise (German Friedrich der Weise), was Elector of Saxony from 1486 to 1525, who is mostly remembered for the worldly protection of his subject Martin Luther.

Frederick was the son of Ernest, Elector of Saxony and his wife Elisabeth, daughter of Albert III, Duke of Bavaria. He is notable as being one of the most powerful early defenders of Martin Luther. He successfully protected Luther from the Holy Roman Emperor, the Pope and other hostile figures. He was not led by religious conviction, but rather by his personal belief in a fair trial for any of his subjects (a privilege guaranteed by the imperial statutory law) and the rule of law. The elector had little personal contact with Luther himself. Frederick's treasurer Degenhart Pfaffinger (Pfaffinger being a German dynasty) spoke on his behalf to Luther. Pfaffinger had supported Frederick since their pilgrimage to the holy land together. Frederick is considered to have remained a Roman Catholic all his life, yet gradually inclining toward doctrines of the Reformation and supposedly converting on his deathbed.

Frederick III is commemorated as a Christian ruler in the Calendar of Saints of the Lutheran Church–Missouri Synod on 5 May.

Born in Torgau, he succeeded his father as elector in 1486; in 1502, he founded the University of Wittenberg, where Martin Luther and Philip Melanchthon taught.

Frederick was among the princes who pressed the need of reform upon Holy Roman Emperor Maximilian I, and in 1500 he became president of the newly formed council of regency (Reichsregiment).

His court painter from 1504 was Lucas Cranach the Elder.

Frederick was Pope Leo X's candidate for Holy Roman Emperor in 1519—the pope had awarded him the Golden Rose of virtue on 3 September 1518 in an effort to persuade him to accept the throne. However, Frederick helped secure the election of Charles V, by agreeing to support Charles and to convince his fellow electors to do the same, provided that Charles repay an outstanding debt to the Saxons dating to 1497.

Frederick ensured Luther would be heard before the Diet of Worms in 1521 and subsequently secured an exemption from the Edict of Worms for Saxony.

Frederick collected many relics in his castle church; his inventory of 1518 listed 17,443 items, including a thumb from St. Anne, a twig from Moses' burning bush, hay of the holy manger, and milk from the Virgin Mary. Money was paid in order to venerate these relics and thus escape years in purgatory. A diligent and pious person who rendered appropriate devotion to each of these relics could merit 1,902,202 years worth of penance (an earthly equivalent of time otherwise spent in Purgatory, removed by indulgences). Two years later, the collection exceeded 19,000 pieces.

He protected Martin Luther from the Pope's enforcement of the edict by faking a highway attack on Luther's way back to Wittenberg, abducting and then hiding him at Wartburg Castle following the Diet of Worms.

Frederick died unmarried at Lochau, a hunting castle near Annaburg (30 km southeast of Wittenberg), in 1525 and was buried in the Schlosskirche at Wittenberg with a grave by Peter Vischer the Younger. He was succeeded by his brother Duke John the Steadfast as Elector of Saxony.

The issue of conversion in 1525

Frederick III was a lifelong Roman Catholic, but he might have converted to Lutheranism on his deathbed in 1525 depending on how his receiving of a Protestant communion is viewed. He leaned heavily towards Lutheranism throughout his later years, guaranteeing safety for his subject and Protestant reformer Martin Luther when he was tried for heresy and excommunicated by the Pope.

Frederick III took communion as outlined in Lutheranism on his death bed. This can be seen as a conversion to Lutheranism, although he never officially or clearly indicated that he converted. By the time of his death it was proclaimed that he "converted to the evangelical faith" and that Saxony was now "evangelical". He protected Martin Luther and allowed Lutheranism to flourish in his realm, protecting him from the Holy Roman Emperor.

His successor, John, Elector of Saxony, had been Lutheran even before he became elector. John made the Lutheran church the official state church in Saxony in 1527.

The contents of this page are sourced from Wikipedia article on 09 Mar 2020. The contents are available under the CC BY-SA 4.0 license.
View Frederick III 's image gallery
Image Gallery