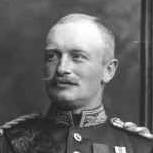 Frederick Augustus III (German: Friedrich August III.; 25 May 1865 – 18 February 1932) was the last King of Saxony (1904–1918) and a member of the House of Wettin. Born in Dresden, Frederick Augustus was the eldest son of King George of Saxony and his wife, Maria Anna of Portugal.

Frederick Augustus served in the Royal Saxon Army before becoming king, and later was promoted to Generalfeldmarschall. Though well-loved by his subjects, he voluntarily abdicated as king on 13 November 1918, after the defeat of the German Empire in World War I. He died in Sibyllenort (now Szczodre) in Lower Silesia and was buried in Dresden.

Following his father's accession, he was in July 1902 appointed à la suite of the German Marine Infantry by Emperor Wilhelm II during a visit to Kiel.

Frederick Augustus married Archduchess Luise, Princess of Tuscany, in Vienna on 21 November 1891. They were divorced in 1903 by the royal decree of the King after she ran away while pregnant with her last child. Luise's flight from Dresden was due to her father-in-law's threatening to have her interned in Sonnestein Mental Asylum for life. Her brother supported her in her wish to escape Saxony. Emperor Franz-Josef of Austria-Hungary did not recognise the divorce.