In 2006, he won the 24 Hours of Le Mans motorcycle endurance race along with Olivier Four and Daniel Ribalta-Bosch riding a Honda CBR. 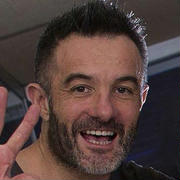