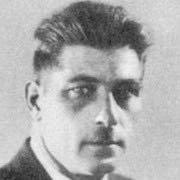 Franz Kutschera (22 February 1904 – 1 February 1944) was an Austrian Nazi politician and government official. He held numerous political and military positions with the Nazi Party and the Schutzstaffel (SS) both before and after the German Anschluss of Austria in 1938. During World War II he served with the SS in France, Yugoslavia and the Soviet Union.

In 1943 he was appointed SS and Police Leader in German-occupied Warsaw, the capital of Poland. Due to his crimes against Poles - including Polish Jews - the Polish resistance Home Army, in agreement with the Polish government in exile, targeted him for assassination. He was gunned down by the Poles in front of the SS headquarters in Warsaw in a special operation by Kedyw, a dedicated Polish special operations unit.

Kutschera was born in Oberwaltersdorf, Lower Austria (then part of the Austro-Hungarian Empire) and was the son of a professional gardener and minor civil servant. After primary school he served as a cabin boy in the Austro-Hungarian Navy in 1918–19 and later attended gymnasium in Villach. After graduation Kutschera enrolled at a machinists school in Budapest before training to become a gardener like his father. Between the 1920 and 1928 Kutschera resided in Opava and Karlovy Vary in the Sudetenland region of Czechoslovakia.

Kutschera joined the Austrian Nazi Party in December, 1930 and the Schutzstaffel (SS) in November, 1931. The Nazi Party in Austria was banned in July 1933 by the Austrofascist government of Engelbert Dollfuss. Despite the government ban, Kutschera remained a committed Party activist and was arrested several times by Austrian authorities for illegal pro-Nazi political activities. From 1933 he served as an SS-Truppführer in Carinthia, and he joined the Sicherheitsdienst (SD) in 1934. In July 1935 he was appointed deputy commander of the 90th SS-Standarte based in Klagenfurt.

Upon the Austrian Anschluss to Nazi Germany in March 1938, Kutschera left active duty with the SS, holding the rank of Obersturmbannführer, and worked briefly for the civil administration of the newly established Reichsgau Kärnten as a deputy to Gauleiter Hubert Klausner. He would become acting Gauleiter himself upon Klausner's sudden death on 12 February 1939 (a position Kutschera held until 1941). After the 1938 election and referendum, Kutschera became a member of the Großdeutscher Reichstag, maintaining this position continuously until his death. In early-1939 he was also appointed to the People's Court as a lay judge.

With the outbreak of World War II Kutschera was named representative of the Reich Defense Commissioner for southeastern Austria and northern Slovenia and "Gau manager" for Carinthia. Kutschera was promoted to the rank of Brigadeführer in 1940 and volunteered for military service. He was transferred to the Vosges and took part in the Battle of France. During the German Balkan Campaign in 1941 Kutschera served as Chief of Civil Administration in Carinthia and Carniola, where he distinguished himself in the fight against the Yugoslav Partisans with fanaticism and extreme harshness.

In January 1942 Kutschera was seconded to the staff of Obergruppenführer Erich von dem Bach-Zelewski, the Higher SS and police leader (HSSPF) for Central Russia (Belarus), where he served as a representative of the Reich Commissariat for the Strengthening of German Nationhood (RKFDV). Soon after his arrival on the Eastern Front, Kutschera personally directed numerous anti-partisan and mass-killing operations in the occupied territories of the Soviet Union. In November 1942 he was given the rank of Generalmajor der Polizei and on 20 April 1943 he was appointed SS and Police Leader (SSPF) for the Mogilev district.

On 25 September 1943, Kutschera took office as SS and Police Leader for the Warsaw district of the General Government in occupied Poland. Once in power in Warsaw he increased the number of roundups (łapanka) of Polish citizens and the number of hostage executions. Every day lists were hung in public announcing the names of the next Poles to be executed in the event of any attack on a German soldier or police officer. These notices were always signed anonymously by the "Commander of the SS and Police at Warsaw District".

Kutschera's exact whereabouts while in Warsaw were a closely guarded secret within the German security services but were discovered in December 1943 by Aleksander Kunicki (Rayski), chief of intelligence for the Agat (Anti-Gestapo) unit of Kedyw. In the course of his routine surveillance of the Gestapo offices on Aleje Szucha, Rayski noticed an Opel Admiral limousine entering the driveway of the nearby Warsaw SS headquarters. The SS officer who emerged from the car wore the clearly identifiable rank and insignia of a Brigadeführer. Intrigued, Rayski began to secretly monitor the mysterious SS man's arrivals and departures from SS headquarters and filed a report with his superiors. An investigation by Kedyw in January, 1944 confirmed that the man being observed by Rayski was Franz Kutschera.

Following his discovery by Rayski, Kutschera was tried in absentia by a secret Special Court of the Polish Underground State. He was charged with crimes against the Polish nation, in particular, the routine mass murder of Polish civilians in Warsaw. Kutschera was convicted and sentenced to death. In London the leadership of the Polish government-in-exile concurred with the decision of the Special Court and approved Kutschera's death sentence. The execution order was soon drafted and relayed to the commander of Kedyw, Brigadier General Emil August Fieldorf (Nil), whose organization had been given the tasks of planning and performing the assassination.

The execution was carried out by the combat-sabotage unit of Kedyw (the predecessor of Battalion Parasol). The assassination team consisted of 12 individual operatives, mostly members of the scouting and guiding Gray Ranks. It was planned to carry out the execution in front of the Warsaw SS Headquarters at 23 Ujazdów Avenue. On the morning of 1 February 1944 three Kedyw gunmen: Bronisław Pietraszewicz [pl] (Lot), who was armed with a German MP 40 submachine gun; Zdzisław Poradzki [pl] (Kruszynka), carrying a British Sten; and Michał Issajewicz [pl] (Miś), armed with a Luger pistol, ambushed Kutschera as his limousine approached SS Headquarters and opened fire directly into the car. Both Kutschera and his driver were shot multiple times and killed. An intense firefight ensued between nearby Germans troops and the other members of the assassination team in which four Poles and two Germans were killed.

Kutschera's funeral ceremony was held by the Nazis at Brühl palace and his body was later transported to Berlin aboard a special train. On 2 February 1944 the German authorities in Warsaw staged a public execution of 300 Polish civilian hostages as a reprisal for the assassination. The Germans also imposed a crushing 100 million złoty tribute on the Polish residents of Warsaw and Warsaw County. Kutschera was succeeded as SS and Police leader by Paul Otto Geibel in March, 1944.

The contents of this page are sourced from Wikipedia article on 09 Mar 2020. The contents are available under the CC BY-SA 4.0 license.
View Franz Kutschera 's image gallery
Image Gallery