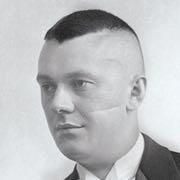 Franz Burda (24 February 1903, in Philippsburg – 30 September 1986, in Offenburg) was a German publisher and Nazi Party member. He inherited his father's publishing business, which he developed into what is now the Hubert Burda Media conglomerate.

Burda received his doctorate in 1927, at the University of Erlangen with an economic history of the development work of the Baden-products markets. He married Aenne Lemminger on July 9, 1931 and was the father of three sons, Francis, the art collector Frieder Burda, and Hubert.

From 1934 to 1937 Burda was a member of the paramilitary National Socialist Motor Corps. He joined the Nazi Party in 1938, and was also a member of other Nazi organisations. His biographer has characterised his involvement with Nazism as essentially commercial and pragmatic, rather than ideological. In 1933 he stated publicly that his business did not have any Jewish employees or co-owners, although he would have privately known that statement to be untrue, having intervened on behalf of the Jewish wife of one of his employees.

He developed his family's small printing business into a large media conglomerate. He benefited from "Aryanization" of Jewish property by the Nazi government when in 1938 Burda and partners acquired Großdruckerei, Papiergroßhandlung und Papierwarenwerk Akademiestraße Gebrüder Bauer in Mannheim. Its owner Berthold Reiss and fellow shareholders were Jews, and so they were forced to sell the business under Nazi "Aryanization" laws.

After the acquisition, Burda invited Reiss to stay on at the company to help manage the transition. Reiss’s son Hans would later write that the pair established a good working relationship, despite the circumstances of the acquisition. Burda interjected on Reiss' behalf when the latter was interned as part of Kristallnacht. The Burda and Reiss families developed a friendship after 1945.

Burda avoided military service himself by obtaining a contract printing maps for the military and using his connections. His antisemitic views were evident also in the 1950s.

After 1945, Burda was allowed to publish again. For the French occupation authorities, he printed stamps and school books. In 1948, against the will of many French officers, he managed to bring on the market the magazine Das Ufer ('The shore' or 'The river bank'), the forerunner of the popular magazine later called Bunte. It helped him that he was friends with a particular officer, Raymond Schmittlein, the press chief of the zone, who arranged for the license to be issued in the name of a female friend of Schmittlein's – a 'straw woman,' as it were.

Burda died at the age of 83 after relinquishing control of Hubert Burda Media to his three sons.

The contents of this page are sourced from Wikipedia article on 09 Mar 2020. The contents are available under the CC BY-SA 4.0 license.
View Franz Burda sr. 's image gallery
Image Gallery