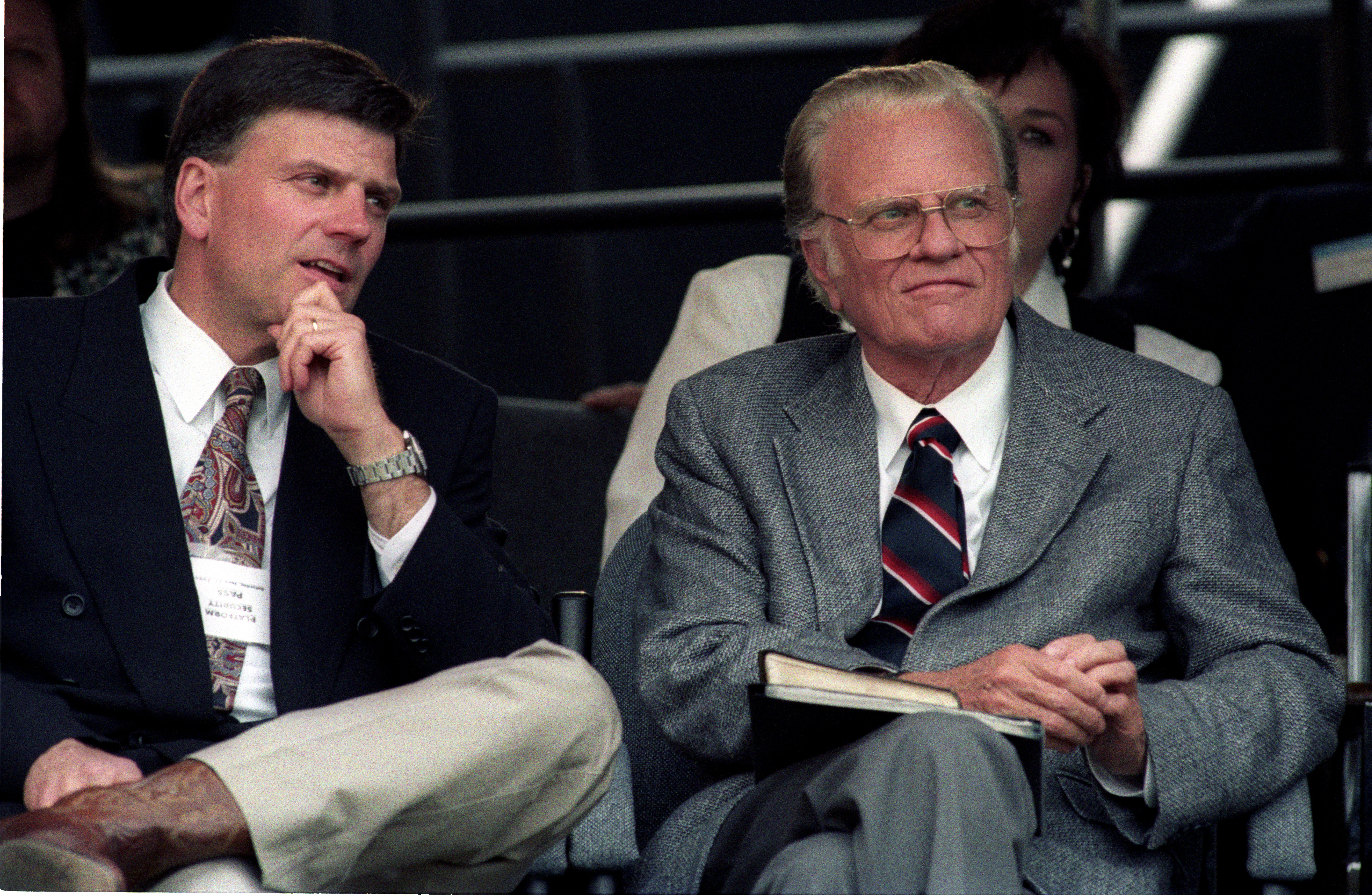 William Franklin Graham III (born July 14, 1952) is an American Christian evangelist and missionary. He is president and CEO of the Billy Graham Evangelistic Association (BGEA) and of Samaritan's Purse, an international Christian relief organization. He has been a committed Christian since 1974 and was ordained in 1982.

William Franklin Graham III was born in Asheville, North Carolina on July 14, 1952 to evangelist Billy Graham and Ruth Bell. He is the fourth of their five children. As a teenager, Graham attended The Stony Brook School, a Christian private school on Long Island, New York, and finished high school in North Carolina.

In 1971, he attended LeTourneau College in Longview, Texas, and was expelled from the school for keeping a female classmate out past curfew.

In 1974, he graduated from Montreat-Anderson College, now Montreat College, with an A.S. and in 1978 from Appalachian State University with a B.A.

In 1974, the 22-year-old had a conversion experience, fully committing himself to Jesus Christ in a hotel room while on a trip to Jerusalem. He was ordained in 1982 by the Grace Community Church in Tempe, Arizona.

On the left, with his father Billy Graham, June 1994

As a young man, Graham was actively mentored by two senior members of the Billy Graham Team; Roy Gustafson and John Wesley White. These men worked alongside Billy Graham and had a desire to positively affect the life and ministry of the eldest son of their longtime friend and colleague. Graham began conducting events for the Billy Graham Evangelistic Association in 1989 and became the CEO in 2000 and its president in 2002. Each year, he conducts at least five Graham Festivals around the world as an evangelist associated with the BGEA. Since 1989, he has preached to more than three million people in 126 evangelistic events.

He went to Hong Kong from November 29, 2007, to December 2, 2007, to host the Hong Kong Franklin Graham Festival, the first major evangelistic rally in Hong Kong since its 1997 transfer of sovereignty, which drew more than 250,000 attendees.

Graham spoke at the 1999 Columbine High School memorial, and he also gave the opening prayer at the 2001 inauguration of George W. Bush.

Shortly after identifying himself as having "become a Christian" in 1974, Graham joined Bob Pierce, founder of Samaritan's Purse, on a six-week mission to Asia. It was during this trip that Graham decided to focus on world relief. In 1979, after the death of Pierce, he became the president of Samaritan's Purse. Graham now also serves as the organization's CEO, and heads efforts on behalf of the organization in more than 100 countries, including programs such as Operation Christmas Child and the "Children's Heart Project".

Samaritan's Purse reported gross receipts of $414,031,085 during the 2010 federal tax year. According to 2014 data, Graham is the highest paid Samaritan's Purse employee at $622,252 annually and leads other charities in compensation. The preacher gave up a salary at the evangelistic association during the late economic downturn, but the leaders urged him to accept compensation again and he now receives increased retirement contributions as well as a regular salary. The evangelistic association reported 2013 revenues as $106.5 million and 2014 as $112,893,788.

Graham, a supporter of the 2003 invasion of Iraq, came under criticism for comments he made about Islam in the wake of the September 11, 2001 attacks when he referred to Islam as "a very evil and wicked religion." Further criticism came on April 18, 2003, when he preached at a Good Friday service at the Pentagon. Graham has made controversial remarks against Islam saying "True Islam cannot be practiced in this country," Graham told CNN's Campbell Brown in December 2009. "You can't beat your wife. You cannot murder your children if you think they've committed adultery or something like that, which they do practice in these other countries." On April 22, 2010 after objections from the Military Religious Freedom Foundation and the Muslim group Council on American–Islamic Relations (CAIR), the Pentagon rescinded his invitation from the Christian conservative National Day of Prayer Task Force to speak at a Pentagon National Day of Prayer event. He still attended the National Day of Prayer meeting at the Pentagon, but outside in the parking lot with about a dozen people.

In the August 30, 2010 issue of Time magazine, "Does America Hate Islam?" Graham reportedly said that Islam "is a religion of hatred. It's a religion of war." Building the cultural center near Ground Zero, he says, means Muslims "will claim now that the World Trade Center property ... is Islamic land."

On Iraq, Graham says he is, "poised and ready" to send representatives of the charity he runs to Iraq as soon as possible. While the purpose is humanitarian aid, Graham also admits, "I believe as we work, God will always give us opportunities to tell others about his Son. ... We are there to reach out to love them and to save them, and as a Christian, I do this in the name of Jesus Christ."

On August 19, 2010, when asked by CNN correspondent John King if he had doubts that President Barack Obama is a Christian, Graham stated, "I think the president's problem is that he was born a Muslim, his father was a Muslim. The seed of Islam is passed through the father like the seed of Judaism is passed through the mother. He was born a Muslim, his father gave him an Islamic name." Graham continues to say, "Now it's obvious that the president has renounced the prophet Mohammed, and he has renounced Islam, and he has accepted Jesus Christ. That's what he says he has done. I cannot say that he hasn't. So I just have to believe that the president is what he has said." In a March 2011 interview with the conservative Internet publication Newsmax, Graham claimed that Obama had "allowed the Muslim Brotherhood to become part of the U.S. government and influence administration decisions," asserting that:

The Muslim Brotherhood is very strong and active in our country. It's infiltrated every level of our government. Right now we have many of these people that are advising the US military and State Department on how to respond in the Middle East, and it's like asking a fox, like a farmer asking a fox, "How do I protect my henhouse from foxes?" We've brought in Muslims to tell us how to make policy toward Muslim countries. And many of these people we've brought in, I'm afraid, are under the Muslim Brotherhood.

When Sudanese President Omar Hassan al-Bashir was indicted by the International Criminal Court in March 2009, Graham argued in an op-ed in The New York Times that Bashir should not be indicted for alleged genocidal acts because the indictment would lead to the collapse of the 2005 peace agreement. People for the American Way, among others, criticized Graham for downplaying Bashir's war in mostly Muslim Darfur because of peace in the mostly Christian south of Sudan and because Bashir has allowed Graham and his Samaritan's Purse latitude in operating in Sudan. In September 2010, Graham stated on ABC's This Week with Christiane Amanpour that building churches and synagogues is forbidden in most countries in the Islamic world.

In a March 2011 interview with Newsmax, Graham said the 2011 earthquake and tsunami in Japan "may be" the second coming and Armageddon.

On February 28, 2012 Graham responded to a one-page letter sent by the National Association for the Advancement of Colored People (NAACP) as an: "Open Letter from Leaders of Faith Regarding Statements by Franklin Graham." In the introduction to the one-page letter the fourteen signatories stated: "we are greatly troubled by recent attempts by some religious leaders to use faith as a political weapon. We were disturbed and disappointed by statements made by Rev. Franklin Graham during an interview on MSNBC that questioned whether President Obama is a Christian." In closing, the open-letter stated: "We call on Rev. Graham and all Christian leaders to exemplify this essential teaching of Jesus and refrain from using Christianity as a weapon of political division."

In his open-letter response, Graham apologized to President Obama stating: "I regret any comments I have ever made which may have cast any doubt on the personal faith of our president, Mr. Obama. The president has said he is a Christian and I accept that." In the open-letter closing Graham stated: "In this election season and challenging economic time I am praying for our country and for those who lead it—for we are commanded in Scripture to do so."

Graham supported North Carolina Amendment 1, which was passed by a voter referendum on May 8, 2012, prohibiting same-sex marriage and all domestic partnerships. Graham responded to Obama's May 9, 2012, statement of support for same-sex marriage, saying, "President Obama has, in my view, shaken his fist at the same God who created and defined marriage. It grieves me that our president would now affirm same-sex marriage, though I believe it grieves God even more." Graham defended Russian President Vladimir Putin's stance against homosexuality, praising him for "protecting children from any homosexual agenda or propaganda."

In October 2012, Billy Graham publicly endorsed the Republican presidential candidate, Mitt Romney. Shortly after, references to Mormonism as a cult were removed from Graham's Web site. Observers have questioned whether the support of Republican and religious right politics on issues such as same-sex marriage coming from Graham, who no longer speaks in public or to reporters, in fact reflects the views of his son, Franklin, head of the BGEA. Graham has denied this, and says that he will continue to act as his father's spokesperson rather than allowing press conferences.

Graham has commented on Hinduism as well, saying, "no elephant with 100 arms can do anything for me. None of their 9,000 gods is going to lead me to salvation".

On January 14, 2015, Duke University canceled plans to have an amplified Muslim call to prayer played each Friday from the top of its chapel bell tower. Media outlets, including Fox News and CBS, credit Graham for organizing a campaign that garnered more than 70,000 "Likes" on Facebook, calling on the University to cancel the call to prayer and lobbying alumni to boycott the school if they did not.

On June 2016, Graham told a crowd, "I have zero hope for the Democratic Party; I have no hope for the Republican Party. I am running a campaign to put God back in the political process." Nevertheless, in November 2016, Graham told The Washington Post that God had played a role in Donald Trump's election as US president, saying: "I could sense going across the country that God was going to do something this year. And I believe that at this election, God showed up." The same newspaper noted that the day after Trump's victory, Graham had posted a comment on Facebook in which he wrote, "Did God show up? […] In watching the news after the election, the secular media kept asking 'How did this happen?' '‘What went wrong?' 'How did we miss this?' Some are in shock. Political pundits are stunned. Many thought the Trump/Pence ticket didn’t have a chance. None of them understand the God-factor." At the Inauguration of Donald Trump on January 20, 2017, Graham chose to read a passage from Paul’s First Letter to Timothy, chapter 2, which calls for prayers for all people, including “kings and for all those in authority, that we may live peacefully quiet lives in all godliness and holiness.”

As a New Year's resolution for 2017, Graham announced he was adopting a vegan diet for six months, for the purpose of losing weight, citing as his inspiration Daniel in the Bible. 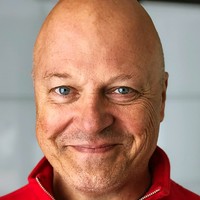