František "Frank" Daniel (April 14, 1926 – March 29, 1996) was a film director, producer and screenwriter born in Kolín, Czechoslovakia (the present day Czech Republic). He is known for developing the sequence paradigm of screenwriting.

František Daniel entered film after earning a master's degree in music. Before emigrating to the United States he produced and directed over 40 films in the former Czechoslovakia, including Ján Kadár's Oscar-winning The Shop on Main Street (Obchod na Korze) (1965). Frank was involved in the movie as a producer, but in the Czech movie industry at the time everyone worked together on almost all the films done. This was a time of communism where rank and social standing were considered western evils. The film community rallied together against the bureaucracy to get each other's films financed and made. Frank was not especially interested in screen credit and lent a hand in every production that needed help. In addition to producing films, Daniel also directed two films.

His biggest contribution to cinematography, particularly American cinema, has been as a teacher and as the head of some of the world's most prestigious film schools. Daniel taught film making – screenwriting in particular— around the world.

Upon his return home, Daniel founded his own production company and also served as dean of the Faculty of Film and Television – FAMU part of the Academy of Performing Arts in Prague, Prague's famous film school. While in charge, he was liberal in allowing such blossoming filmmakers as Miloš Forman and Jiří Menzel leeway to make their own types of films, regardless of Communist government sanctions, which helped lead in the liberalization of his country in the 1960s.

In 1965, he produced The Shop on Main Street, which won an Oscar for the best foreign language film.

Daniel first toured the United States at the behest of W. McNeil Lowry of the Ford Foundation, who commissioned him to do a survey of film education in the United States and make recommendations for its future development. Daniel subsequently immigrated to the United States in 1969 after the Soviets invaded his country. In 1969 he became the first dean of the American Film Institute. One of his protégés was future director David Lynch, who specifically mentions a special thank you in Eraserhead, 1977. Daniel left the Institute in 1976 to become Henry Luce Professor at Carleton College in Minnesota. In 1978, he moved to Columbia University, where he was reunited with Miloš Forman, his former student, with whom he co-chaired the Columbia University School of the Arts Film Department. When Robert Redford founded Sundance Institute in 1981, Daniel was recruited by Sundance Executive Director Sterling Van Wagenen to be the Institute's first Artistic Director, a guiding post he held for over a decade. He taught at Columbia University until 1986. After Columbia he became the dean of USC School of Cinema-Television, a post he stepped down from in 1990, continuing to teach screenwriting in the Graduate Screenwriting Division. He continued to develop scripts until he died on March 29, 1996, at the age of 69 in Palm Springs, California, of a heart attack. Daniel was buried at the Forest Lawn Memorial Park in Cathedral City, California.

Speaking of the late Daniel in a 1996 interview, David Lynch said, "I am sorry to say he died not long ago, and I have to tell you that he was my only teacher. He gave much to other people, he helped many people. He was a noble-minded and non-egoistic man, and no one understood the art of film-making as he did. He understood it and truly loved it – his criticism was always constructive and never purposely offended anybody. He was open about saying what he didn't like, but he did it in a way that would help you. And that cannot be said about most of the critics in USA. I am very sorry he is not here."{Kinorevue, July–August 1996}

The most notable of his projects are: 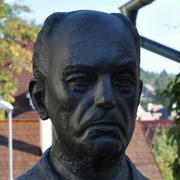