Sir Francis "Frank" Robert Benson (4 November 1858 – 31 December 1939), commonly known as Frank Benson or F. R. Benson, was an English actor-manager. He founded his own company in 1883 and produced all but three of Shakespeare's plays.

Born in Tunbridge Wells, he was educated at Winchester and New College, Oxford, and at the university was distinguished both as an athlete (winning the Inter-university three miles) and as an amateur actor. In the latter respect he was notable for producing at Oxford the first performance of a Greek play, the Agamemnon, in which many Oxford men who afterwards became famous in other fields took part.

On leaving Oxford, Benson took to the professional stage, and made his first appearance at the Lyceum, under Henry Irving, in Romeo and Juliet, as Paris, in 1882. In the next year he went into managership with a company of his own, taken over from Walter Bentley, and from this time he became gradually more and more prominent, both as an actor of leading parts himself and as the organizer of practically the only modern repertory company touring through the provinces. Benson's chief successes were gained out of London for some years, but in 1890 he had a season in London at the Globe and in 1900 at the Lyceum, and in later years he was seen with his repertoire at the Coronet.

His company included from time to time many actors and actresses who, having trained under him, became prominent on their own account, and both by his organization of this regular company and by his foundation of a dramatic school of acting in 1901, Benson exercised a most important influence on the contemporary stage.

From the first he devoted himself largely to the production of Shakespeare's plays, reviving many which had not been acted for generations, and his services to the cause of Shakespeare can hardly be overestimated. Over time, Benson's companies performed all but three of Shakespeare's plays (neglecting All's Well That Ends Well, Titus Andronicus and its "bloody villainy," and Troilus and Cressida). From 1886 to 1916 (with a few gaps) he managed the Stratford-on-Avon Shakespearean Festival.

His romantic and intellectual powers as an actor, combined with his athletic and picturesque bearing and fine elocution, were conspicuously shown in his own impersonations, most remarkable among which were his Hamlet (in 1900 he produced this play without cuts in London), his Coriolanus, his Richard II, his Lear and his Petruchio.

Richard III (1911) is one of his only surviving film performances. He both starred in the lead role and directed the production, made by the Co-operative Cinematograph Co.

Benson was knighted following a performance of Julius Caesar at Drury Lane Theatre in 1916.

He was the son of William Benson of Alresford, Hants, and was born at Tunbridge Wells. In 1886 he married Gertrude Constance Cockburn (Featherstonhaugh), who acted in his company and continued to play leading parts with him.

He came of a talented family, his elder brother, W. A. S. Benson, becoming well known in the world of art as one of the pioneers in the revival of English industrial craftsmanship, especially in the field of the metallic arts; and his younger brother, Godfrey Benson, being a Liberal politician. He was also the cousin of actor Basil Rathbone, to whom he bore a strong resemblance. 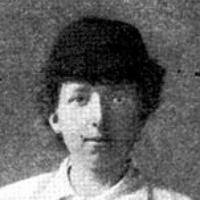