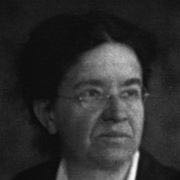 Florence Rena Sabin (November 9, 1871 – October 3, 1953) was an American medical scientist. She was a pioneer for women in science; she was the first woman to hold a full professorship at Johns Hopkins School of Medicine, the first woman elected to the National Academy of Sciences, and the first woman to head a department at the Rockefeller Institute for Medical Research. During her years of retirement, she pursued a second career as a public health activist in Colorado, and in 1951 received the Albert Lasker Public Service Award for this work.

On November 9th, 1871, Serena Sabin gave birth to her youngest daughter, Florence Rena Sabin, in Central City, Colorado. Florence's mother was a schoolteacher who later died from puerperal fever (sepsis) in 1878. Her father, George K. Sabin, was a mining engineer living and working on site with his family. Shortly after her mother's death, Florence and her sister (Mary) moved in with their Uncle Albert in Chicago before relocating to Vermont with their paternal grandparents.

Throughout her childhood Sabin had intentions of becoming a pianist, however, she was never musically talented, causing her to shift her focus on a future in science during high school.

Sabin earned her bachelor's degree from Smith College in 1893. For two years she taught high school mathematics in Denver followed by one year of zoology at Smith as a means to finance her first year of graduate school.

In 1896, Sabin enrolled at the Johns Hopkins University School of Medicine as one of fourteen women in her class. The school opened in 1893 and was co-ed from the beginning because of an early donor's contingency which required the admittance of female students.

While at Hopkins, Sabin’s observational skills and perseverance in the laboratory caught anatomist Franklin P. Mall's attention. Mall inspired Sabin by helping narrow her focus onto two projects well regarded by scientists and foundational to her future research and consequent legacy. The first project was to produce a three-dimensional model of a newborn baby’s brain stem which became the focus of the textbook, An Atlas of the Medulla and Midbrain (1901). The second project involved the embryological development of the lymphatic system which asserted that the lymphatic system is formed from the embryo’s blood vessels and not other tissues.

Sabin graduated from Johns Hopkins University School of Medicine in 1900.

In 1902 she began to teach in the Department of Anatomy at Johns Hopkins. By 1905 she was promoted to associate professor and finally appointed professor of embryology and histology in June 1917, the first woman to become a full professor at a medical college.

In 1921, Sabin was named the first female president of the American Association of Anatomists. She continued her research on the origins of blood, blood vessels, blood cells, the histology of the brain, and the pathology and immunology of tuberculosis at Hopkins. In 1924, Sabin’s work on the origins of blood vessels earned her membership in the National Academy of Science.

In 1925, Sabin left Johns Hopkins after completing her research amidst institutional discrimination and her desire to research full time.

In September 1925 she became head of the Department of Cellular Studies at the Rockefeller Institute for Medical Research in New York City. Her research focused on the lymphatic system, blood vessels and cells, and tuberculosis.

In 1925, she was voted into the National Academy of Science. She was the first woman to gain membership in this prestigious body and would remain the lone female member for the next 20 years.

In 1926, she joined the research committee of the National Tuberculosis Association. The committee's purpose was to consolidate all of the tuberculosis research taking place with the hope of controlling the disease proactively. While here, Sabin devoted her research to immune cells, monocytes in particular, which developed into other cells. Sabin spent her final years at the institute determining the effects imposed by foreign substances and their consequent formation of antibodies.

In 1938, Sabin left her position at Rockefeller Institute and moved back to Colorado for retirement.

After six years of quiet retirement, Sabin accepted Colorado Governor John Vivian's request to chair a subcommittee on health beginning in 1944. She presented her findings asserting that the state was “backward in regard to public health” in a letter to the Governor in April 1945. Knowing that health care legislation had been voted down consistently in the past due to uninterested politicians, she was relentless in her demand for reform.

While she was in her early seventies, Sabin refused to let a snowstorm prevent her from making it to a speech in support of her cause despite public travel concerns. Beginning with this speech, Sabin worked to have politicians who opposed health reform defeated by those in support of it. These efforts resulted in the passing of a set of laws in her name. The “Sabin Health Laws” modernized public health in Colorado by providing more hospital beds to treat tuberculosis, resulting in significant reductions in cases.

In an address to the Illinois Statewide Health Committee in 1947, Sabin said that she was chosen as committee chair because the Governor had no interest in public health and appointed “an old lady” because he did not think she would be able to accomplish anything. In 1948 she became manager of health and charities for Denver, donating her salary over the next three years to medical research.

In 1951 Sabin retired for a second and final time, continuing to advocate for public health issues. Sabin's lifetime of service resulted in the University of Colorado’s Department of Medicine being named the Florence R. Sabin Building for Research in Cellular Biology.

Sabin died of a heart attack on October 3, 1953 (she was 81). She was cremated and her ashes were interred in the Fairmount Mausoleum at Fairmount Cemetery in Denver, Colorado.

In the Johns Hopkins Medical Institutes Archives, Sabin's collection of papers and medical records from 1903 - 1941 are stored and some even released upon request. The Sophia Smith Collection at Smith College holds many of Dr. Sabin’s papers. Other collections are located in the American Philosophical Society Library in Philadelphia, the University of Colorado Medical School, the Colorado State Historical Society’s Division of Museums, the Rockefeller Institute, and in the Alan Mason Chesney Papers at Johns Hopkins University.

The contents of this page are sourced from Wikipedia article on 27 Mar 2020. The contents are available under the CC BY-SA 4.0 license.
View Florence R. Sabin 's image gallery
Image Gallery