Ferdinand von Sammern-Frankenegg (March 17, 1897 – September 20, 1944) was a German SS functionary during the Nazi era. He served in World War I and then after Germany had formally surrendered in the Freikorps Oberland and the Steirischer Heimatschutz. He served as SS and Police Leader of the Warsaw area in German-occupied Poland from 1941 until 1943 during World War II.

Sammern-Frankenegg was in charge of the Großaktion Warschau, the single most deadly operation against the Jews in the course of the Holocaust in occupied Poland, which entailed sending between 254,000 and 265,000 men, women and children aboard overcrowded Holocaust trains to the extermination camp in Treblinka. The "liquidation" of the Warsaw Ghetto between July 23 and September 21, 1942 was disguised as a "resettlement action" in order to trick the victims into cooperating. It was a major part of the murderous campaign codenamed Operation Reinhard in the Final Solution. Von Sammern-Frankenegg remained in Warsaw until his first offensive operation in the suppression of the Warsaw Ghetto Uprising on April 19, 1943, which was unsuccessful.

After the failed offensive, von Sammern-Frankenegg was replaced by Jürgen Stroop, and court-martialed by SS leader Heinrich Himmler on April 24, 1943 for his alleged ineptitude; which, for the SS, meant only one thing: guilty of "defending Jews". He was subsequently transferred to Croatia where in September 1944 he was killed in a Yugoslav partisan ambush near the town of Klašnić.

The contents of this page are sourced from Wikipedia article on 12 Mar 2020. The contents are available under the CC BY-SA 4.0 license.
View Ferdinand von Sammern-Frankenegg 's image gallery
Image Gallery 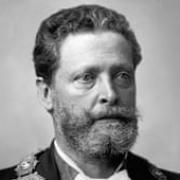