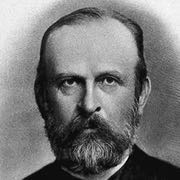 Baron Ferdinand Freiherr von Richthofen FRSFor HFRSE BGS (5 May 1833 – 6 October 1905), better known in English as Baron von Richthofen, was a German traveller, geographer, and scientist. He is noted for coining the terms "Seidenstraße" and "Seidenstraßen" = "Silk Road(s)" or "Silk Route(s)" in 1877. He also standardized the practices of chorography and chorology. He was an uncle of the World War I flying ace Manfred von Richthofen, best known as the "Red Baron".

He was born in Carlsruhe, at that time in Prussian Silesia, and was educated in the Roman Catholic Gymnasium in Breslau.

He studied Medicine at the University of Breslau and at the Humboldt University of Berlin. He traveled or studied in the Alps of Tyrol and the Carpathians in Transylvania. In 1860, he joined the Eulenburg Expedition, a Prussian expedition which visited Ceylon, Japan, Taiwan, Celebes, Java, the Philippines, Siam, Burma between 1860 and 1862. No important work resulted from these travels, for much of Richthofen's records and collections was lost. China was at the time inaccessible owing to the Taiping rebellion, but Richthofen was impressed with the desirability of exploring it. From 1862 to 1868, he worked as a geologist in the United States, discovering goldfields in California. He then followed up his interest in China by several more trips there, and also to Japan, Burma, and Java. In China he located the dried-up lake bed of Lopnur.

He published his geographical, geological, economic, and ethnological findings in three volumes with an atlas, which, however, did not cover the entire field or complete the author's plan. This work appeared at Berlin in 1877-85 under the title of China: Ergebnisse eigner Reisen und darauf gegründeter Studien. In this standard work, the author deals not only with geology but with every subject necessary to a general geographical treatise. Notably he paid close attention to the economic resources of the country he traversed. He also wrote a valuable series of letters to the Shanghai Chamber of Commerce, and first drew attention to the importance of the coalfields of Shantung, and of Kiaochow as a port.

He was appointed professor of geology at the University of Bonn beginning in 1875, but being fully occupied with his work in China he did not take up professorial duties until 1879. He became professor of geography at the University of Leipzig in 1883, and professor of geography at the Friedrich Wilhelm University of Berlin in 1886. He occupied the latter position until his death. His lectures attracted numerous students who subsequently became eminent in geographical work, and in order to keep in touch with them he established his weekly geographical “colloquium.” Among his most famous students was Sven Hedin, the Swedish explorer. He served as president of the German Geographical Society for many years and founded the Berlin Hydrographical Institute.

He is noted for coining the terms "Seidenstraße" and "Seidenstraßen" = "Silk Road(s)" or "Silk Route(s)" in 1877. He also standardized the practices of chorography and chorology.

When William Gill consulted him about a planned trip to China, he remarked:

The mountain range on the southern edge of the Hexi Corridor in western China was named Richthofen Range after him, although the modern name is now Qilian Mountains. The 12940 ft. Mount Richthofen in Rocky Mountain National Park is also named after him.

The contents of this page are sourced from Wikipedia article on 09 Mar 2020. The contents are available under the CC BY-SA 4.0 license.
View Ferdinand von Richthofen 's image gallery
Image Gallery